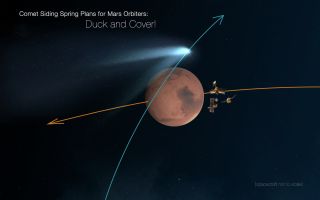 Spacecraft at Mars will hide behind the planet to protect themselves as Comet Siding Spring makes its close approach on Oct. 19, 2014.
(Image: © NASA/JPL-Caltech)

A comet from the outer reaches of the solar system is due to give Mars a close shave on Sunday (Oct. 19), and you can watch the flyby live online.

You can watch the comet webcasts live on Space.com, as well as a view from the Virtual Telescope Project will also cover the comet's close approach Sunday (Oct. 19) beginning at 12:45 p.m. EDT (1645 GMT). [See amazing images of Comet Siding Spring]

"The uncertainty in how Comet Siding Spring will look, including the length and shape of its tail or tails, and its behavior during this extremely close encounter with Mars, provides plenty of excitement for Slooh members who have been tracking the comet for months," Slooh astronomer Bob Berman said in a statement. "But the general public will also have the opportunity to get a first look of Comet Siding Springs live from Slooh as it nears Mars."

Scientists are planning to monitor Siding Spring's buzzing of the Red Planet closely. NASA officials will use spacecraft orbiting Mars and roving the planet's surface to get a good look at the comet and maybe learn something new about it. The space agency's MAVEN (Mars Atmosphere and Volatile EvolutioN) mission — which only recently arrived at Mars — will monitor the affects of the comet's dust on the planet's atmosphere.

The Curiosity rover should also have a chance to see (and snap photos) of its view of Siding Spring from the planet's surface. Other spacecraft orbiting Mars will also be trained on the comet to catch its flyby.

Researchers think that this is the first time the comet has been this close to the sun, so studying the way it changes could actually help them learn more about comets in general, scientists have said.

Comet Siding Spring probably formed between the orbits of Jupiter and Neptune about 4.6 billion years ago, when the solar system was still young. Because the comet probably hasn't been this close to the sun, it might give scientists a chance to see the comet as it was billions of years ago, when the planets were still coming together.

"If we study the comet — its composition, its structure — it will tell us a lot about how we think maybe the planets were formed," said Carey Lisse, a senior astrophysicist at the Johns Hopkins University Applied Physics Laboratory in Laurel, Maryland.

Editor's Note: If you plan to track the Comet Siding Spring with a telescope and capture an image of the comet, let us know! You can send images and comments in to Space.com at: spacephotos@space.com.