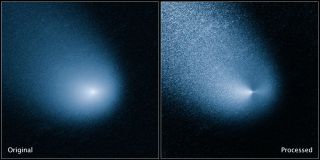 A comet that was born before the Earth formed is flying in from the edge of the solar system, bound for a dramatic date with Mars on Sunday (Oct. 19).

Comet Siding Spring — unknown and undiscovered until 2013 — will zoom past the Red Planet Sunday afternoon in an encounter that could help scientists better understand how the solar system came to be.

Siding Spring will fly 87,000 miles (139,500 kilometers) from Mars at 2:27 p.m. EDT (1827 GMT) Sunday, about one-third of the distance from the Earth to the moon. Researchers will observe the close encounter with the fleet of orbiters and rovers at the Red Planet. [See photos of Comet Siding Spring]

Siding Spring is the first comet from the Oort Cloud, a collection of icy bodies at the edge of the solar system that will be observed up close by spacecraft. All comets examined in the past came from closer in, around Jupiter's orbit or the edge of the Kuiper Belt, a huge set of icy objects beyond Neptune.

"We can't get to an Oort Cloud comet with our current rockets," Carey Lisse, a senior astrophysicist at the Johns Hopkins University Applied Physics Laboratory, said during a NASA news conference last week. "These orbits are very long and extended — and at very great velocities ... It's a free flyby, if you will, and that's a very fantastic event for us to study."

Siding Spring was created in the first few million years of Earth's solar system, Lisse said. It likely formed somewhere between the orbits of Jupiter and Neptune, where many similar objects coalesced into the giant planets. But a gravitational push kicked Siding Spring out into the Oort Cloud; it took another jolt from a passing star a million years ago or so to send it toward the inner solar system.

Half of the comet is rocky, and the other half is made up of volatile ices, such as water and carbon dioxide. Its flight past Mars is the first time it will make it into the solar system, past Jupiter's orbit. The comet just recently crossed the "water-ice line," the point where water can exist as a liquid in the solar system.

Siding Spring, which Lisse said is about the size of an Appalachian mountain, will swing by Mars in a retrograde direction, the opposite way in which the planets orbit around the sun. This means any dust that comes off the comet will be moving at about 119,000 mph (190,000 km/h) relative to Mars.

"Anything that comes off the comet that hits either Mars or the spacecraft is going to pack a real large amount of kinetic energy — a real wallop — so that's one of the things that we've been worried about," Lisse said.

As a result, NASA has maneuvered its three operational Mars orbiters to be on the "safe" side of the Red Planet when dust exposure is highest.

The comet was first discovered in January 2013 by Robert McNaught at the Siding Spring Observatory in Australia. Ever since then, scientists have been studying the celestial visitor with a variety of space- and ground-based assets, in an attempt to learn more about its history.

To learn about the coment, scientists will have to get an up-close look at its nucleus, to see its shape, size and composition. If all goes according to plan, NASA's Mars Reconnaissance Orbiter will take high-resolution pictures of the comet's heart, making it the first time an Oort Cloud comet's nucleus will be seen up close.

Some other planned observations will come from NASA's Chandra X-Ray telescope (which will look for any material thrown in Mars' atmosphere), and the newly arrived Mars Atmosphere and Volatile EvolutioN (MAVEN) mission, which will see how the Red Planet's atmosphere reacts as the comet passes by.

NASA's Curiosity and Opportunity rovers will also participate in the campaign, attempting to take the first images of a comet from the surface of another planet.