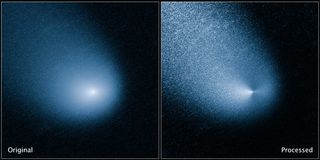 A comet poised to give Mars a close shave later this year is now blasting dust into space from at least two jets on its surface, photos from the Hubble Space Telescope reveal.

The latest Hubble photo of Comet Siding Spring, captured on March 11, shows what appear to be two jets of dust coming off the icy object's nucleus. The comet is making its way toward the inner solar system for an Oct. 19 rendezvous with Mars, during which it will miss the planet by just 84,000 miles (135,185 kilometers) — about one-third the distance between Earth and the moon.

"This is critical information that we need to determine whether, and to what degree, dust grains in the coma of the comet will impact Mars and spacecraft in the vicinity of Mars," Jian-Yang Li, of the Planetary Science Institute in Tucson, Ariz., said in a statement.

The new Hubble photo was taken when Comet Siding Spring was 353 million miles (568 million km) from Earth. The comet's closest approach to our planet will come on Oct. 25, when it's 130 million miles (209 million km) away — likely too distant to be seen in our skies with the naked eye.

Scientists still aren't sure how much of a threat Comet Siding Spring will pose to orbiters such as NASA's Mars Reconnaissance Orbiter and Mars Odyssey. They should start to get a better idea in April and May, as the comet gets closer to the sun and begins shedding more material.

NASA officials have said that they're not worried about the agency's Red Planet rovers, Opportunity and Curiosity. Though Mars' atmosphere is just 1 percent as thick as that of Earth, it's still substantial enough to prevent comet dust from reaching the planet's surface, they say.

Comet Siding Spring is formally known as Comet C/2013 A1 (Siding Spring), and was discovered in January 2013 by veteran comet hunter Robert McNaught at Australia's Siding Spring Observatory. Scientists suspect the comet is making its first trip to the inner solar system from the frigid and faraway comet repository known as the Oort Cloud. It won't pass this way again for another million years or so.