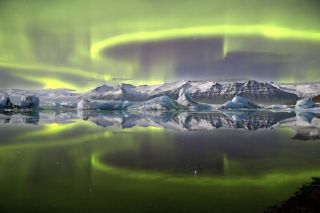 This overall winning photo shows a green aurora above a glacial lagoon in Iceland.
(Image: © Aurora over a Glacier Lagoon © James Woodend (U.K.))

A bright green aurora reflects off a glacial lake against the backdrop of a snow-covered mountain range in an incredible photo that took home first prize in an astrophotography competition.

Representatives of the Royal Observatory in Greenwich, England, have awarded James Woodend — the photographer behind the stunning aurora image — the overall prize in the observatory's Astronomy Photographer of the Year contest for 2014. The winners of the contest (which is in its sixth year) were announced today (Sept. 18).

"Although this is not a strong aurora, they sometimes make the best reflection shots," Woodend said of his image in a statement. "The water was very still — you can see the icebergs floating in the lagoon and their reflections. In the background is the Vatnajökull Glacier." [See all of the amazing winning photos for 2014]

The British photographer captured his winning photo in Iceland's Vatnajökull National Park, with the glacial Jökulsarlon lagoon in the foreground.

Woodend won 1,500 pounds (about $2,458) in prize money for his entry, and his image also took home first prize in the "Earth and Space" competition category.

"I love the combination of whites and blue in the glacier with the chilly green of the aurora in this wonderfully icy picture," competition judge and Royal Observatory Public Astronomer Marek Kukula said of the image in a statement. "We've had some amazing aurora pictures in the competition over the last six years, but this is the first time a photo of the northern lights has actually won the Astronomy Photographer of the Year prize. We were all completely in awe of the colors and symmetry of James' shot."

Other photographers from around the world also took home competition prizes in different astrophotography categories. Alexandra Hart's close-up photo of the sun shows the boiling hot activity of the star and took home top prize in the "Our Solar System" section of the contest.

"This year, two things stood out for me while judging: The record-breaking number of 2,500 entries from a truly global community of astrophotographers, and the staggering quality of the images. It was regularly hard to believe that many were taken from the surface of the Earth and not a space telescope orbiting our planet," BBC Sky at Night Magazine's Editor and competition judge Chris Bramley said in the same a statement.

Interested space fans in England can see an exhibition of the winning images from now until February 2015 at the Royal Observatory's Astronomy Centre. The winners and finalists will be published in a book, which can be purchased in bookstores or online from the Royal Observatory.