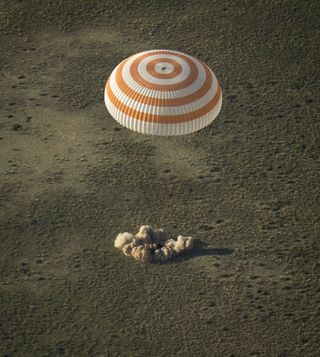 The Soyuz undocked from the space station 3 1/2 hours earlier while the two vehicles were above Mongolia, marking the end of Expedition 39 and the beginning of Expedition 40 aboard the orbiting lab. [Expedition 39 Returns to Earth (Photos)]

"What an exciting time we shared in this increment," Expedition 39 Commander Wakata said Monday (May 12) as he handed the station's reins over to NASA astronaut Steve Swanson. "Congratulations, and best wishes to the crew of Expedition 40 for a successful mission."

Wakata, Mastracchio and Tyurin enjoyed an eventful and historic stint in orbit after arriving at the space station on Nov. 7, 2013. For example, Wakata became the first Japanese person ever to command the station when he took charge of Expedition 39 on March 10.

Just four days later, Wakata and Mastracchio participated in "Live from Space," a two-hour TV event hosted by Soledad O'Brien that aired on National Geographic Channel, as well as Channel 4 in the United Kingdom. "Live from Space" gave viewers in more than 140 countries an idea of what it's like to live and work on the orbiting lab, with Wakata giving a guided tour of the $100-billion complex.

"It is true that it is unprecedented," former NASA astronaut Ron Garan said of the project at the time. "I've never seen any kind of access like this before. Typically, live events from space run 15 minutes, 20 [minutes] tops. Two hours is just unbelievable."

Expedition 39 also oversaw the arrival of SpaceX's robotic Dragon capsule, which launched toward the space station April 18 on the California-based company's third contracted cargo mission for NASA. (SpaceX holds a $1.6 billion deal to make 12 such flights for the agency.)

Expedition 40 will start with a skeleton crew that includes Russian cosmonauts Alexander Skvortsov and Oleg Artemyev, in addition to Swanson.

But the space station will soon be up to full strength once again. Three new crewmembers — NASA's Reid Wiseman, cosmonaut Max Suraev and Alexander Gerst of the European Space Agency — are slated to blast off from Baikonur Cosmodrome in Kazakhstan on May 28.