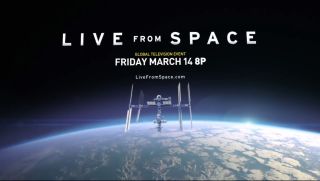 It was a great day of "Live from Space" on the National Geographic Channel, a live two-hour TV event by National Geographic and NASA to showcase what life really is like when for astronauts in space. The unprecedented live show, which airs tonight (March 14) at 8 p.m. ET/5 p.m. PT, aims to bring space down to Earth for viewers like never before.

Last update (10 pm ET): That's a wrap for "Live From Space" on the National Geographic Channel. Wow, where did two hours go? Seems like it flew by as fast as the International Space Station orbits the Earth (hey, wait…it did). Die-hard space fans may have seen much of the show's features before, but seeing them all together, and with such candor, makes it all fresh again for the newcomer and veteran space fan alike. Space.com's Miriam Kramer will have a wrap up of tonight's space TV event later. See our Full Wrap Story Here: 'Live From Space': Astronauts Share Revealing TV Glimpse of Life Off Planet Earth  -  Tariq Malik

See all of Space.com's "Live From Space" updates here, and take a second look at the trailer for the sh

You can see the trailer for "Live from Space" here:

'Live from Space': National Geographic Brings Astronaut Life to Earth on TV Tonight
NASA and the National Geographic Channel is about to take one giant leap for cable kind tonight with 'Live From Space,' unprecedented TV event to share the wonder —and drama — of space travel like never before.

This Island Earth: Amazing Astronaut Views to Shine in 'Live From Space' TV Event
These days, Earthlings are to get pictures directly from the International Space Station. This will be highlighted in a National Geographic special Friday (March 14).

Earth From Space: Amazing Astronaut Photos
Astronauts adore looking at the Earth. In recent years, we've been lucky enough to have astronauts sharing their amazing views of our planet on Twitter, Facebook and other forms of social media. Here are some amazing views from Expedition 38 and 39.

'Live From Space': How Astronauts Use Tech to Share Orbital Life with Earth
NASA uses a constellation of satellites to beam information to and from the International Space Station.

TV's Soledad O'Brien to Host National Geographic's 'Live from Space'
The TV show 'Live from Space' will follow two astronauts on the International Space Station as they describe living and working in space.

Live from Space! National Geographic, NASA Team Up for Cosmic TV Event
TV-viewers around the world will be treated to a live tour of the $100 billion International Space Station next month when the National Geographic Channel airs a two-hour special from the astronauts' orbiting outpost.