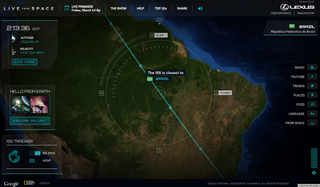 The National Geographic Channel TV show "Live from Space" won't air until tonight (March 14), but you can start gearing up for the historic broadcast right now. The "Live from Space" website now features a live International Space Station tracker that allows anyone to see what the orbiting outpost is flying over in real time.

Until the "Live from Space" program begins at 8 p.m. EDT (0000 March 15 GMT) on the National Geographic Channel, anyone with an Internet connection can explore the top songs, most popular YouTube videos and other fun facts about whatever country the station is passing over using the "Live from Space" website. During the TV show, NASA astronaut Rick Mastracchio and Japanese astronaut Koichi Wakata will participate in a two-hour broadcast from the space station.

Once the broadcast begins, viewers can still track the station, and space fans will also have a chance to see some special live feeds on the website courtesy of NASA. Livefromspace.com will feature three live webcasts: one inside the space station, one outside the station and one streaming from Mission Control in Houston. You can see the live space station feed in the window below:

Wakata and Mastracchio will discuss their lives in space and what it means to look down on Earth from their unique vantage point. Journalist Soledad O'Brien will host the show from Mission Control, and veteran astronaut Mike Massimino will be on hand to take part in the show from the ground as well.