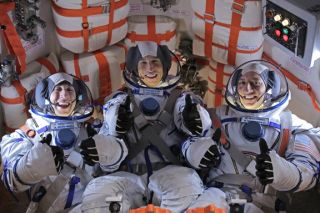 On the season finale of "The Big Bang Theory" that aired Thursday evening (May 10), a main character on the CBS TV sitcom launched into space. Sitting beside him in the spacecraft was Mike Massimino, a real NASA astronaut, who made his second cameo appearance on the show.

In the show's season finale, Massimino, who flew twice on the space shuttle to upgrade the Hubble Space Telescope, joins aerospace engineer Howard Wolowitz, played by actor Simon Helberg, and a fictional cosmonaut, as Expedition 31 crewmates aboard a Russian Soyuz capsule flying to the International Space Station.

The Russian Soyuz and the Sokol spacesuits that were worn by the astronaut and actors are Hollywood replicas, but true to the show's reputation, they are both surprisingly realistic.

collectSPACE.com caught up with Massimino by phone a few hours before the episode was set to air to talk about playing an astronaut on TV, the show's set and the future of space exploration, both for NASA and on "The Big Bang Theory."

collectSPACE: This is your second time appearing on the show. Are you becoming a cast regular?

Michael Massimino: I don't think so. (laughs) I don't know. We'll see how it goes tonight.

collectSPACE: The Soyuz spacecraft set that they built was pretty impressive for TV. Were you impressed by how much attention to detail they gave?

They really try to be very, very accurate in all their stuff, in all the science that they represent on the show. They have a consultant, a guy from UCLA, that helps them out for the science stuff. And then for this, they got a lot of help from NASA to make sure that the set, the costumes and all that stuff looked pretty accurate.

collectSPACE: You've flown on the space shuttle but you haven't yet flown on board the Soyuz. So were you part of the technical consultants for the set?

Massimino: Yeah, but as you say, I've never flown on the Soyuz. I know a little bit about the Soyuz but as I've never flown on it, their questions after a while got to where I had no idea. So I recruited some help from my friends, [astronauts and Soyuz crewmembers] Ron Garan and Mike Fossum. They helped answer a lot of the questions.

collectSPACE:So how long were you in the spacesuit and mock Soyuz?

Massimino:It was a few hours. It was kind like a real launch day, almost.

We arrived, got suited up and they even had a cooling unit for us, too. They were not real suits but they were pretty close replicas, as far as how they looked. They weren't as heavy as a real suit but they were still concerned about us getting overheated under the lights and everything. So, they gave us a cooling water bag to wear on our chests to help keep us cool. It was great.

We were in there, I guess, two-and-a-half to three hours in the suit and inside the mockup.

collectSPACE: So this could count for you towards training for a future flight on a Soyuz, right?

Massimino: I don't know about that! I mean I don't make that call, but it could certainly get you excited about going.

collectSPACE: How concerned were they about your dialog in the Soyuz? Or where you put your hands as compared to what would happen during an actual mission?

Massimino: They wanted to know that as well, and that is where Ron Garan helped out, telling them the kind of conversations you'd have and it would be in Russian. You would speak Russian to the control center.

And even the hands were a big thing, too. Because they wanted to know what we would have as books and how you would hold the books. Ron helped them out with those questions.

Continue reading the interview at collectSPACE.com to learn what Mike Massimino had to say about the future of spaceflight, both by NASA and on "The Big Bang Theory."