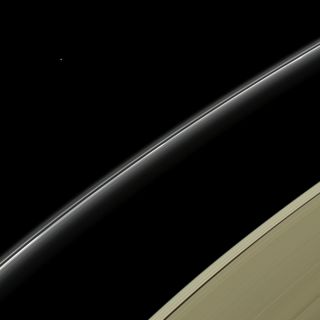 This view from NASA's Cassini spacecraft features a blue planet, but unlike the view from July 19, 2013, that featured Earth, this blue orb is Uranus, imaged by Cassini for the first time. Image released May 1, 2014.
(Image: © NASA/JPL-Caltech/Space Science Institute)

A robotic probe exploring the planet Saturn and its moons has captured an amazing photo of another ringed wonder: Uranus.

The Cassini spacecraft turned its gaze to Uranus, snapping its first-ever photo of the light blue ice giant on April 11. The newly released photo shows the planet — a pale blue dot in the upper left part of the image — shining beyond the distinctive rings of Saturn in the foreground of the photo.

At the time the photo was taken, Uranus was about 28.6 astronomical units from Saturn and Cassini — 1 AU is the distance from Earth to the sun, about 93 million miles (150 million kilometers). At their closest approach, Uranus and Saturn come within about 10 astronomical units of each other about once every 30 years, according to NASA. It takes Saturn nearly 30 Earth years to make a full orbit of the sun. [See more amazing photos taken by the Cassini spacecraft]

While both Saturn and Uranus are relatively large and gaseous planets, scientists don't necessarily classify them in the same category.

"The planets Uranus and Neptune are sometimes referred to as 'ice giants' to distinguish them from their larger siblings, Jupiter and Saturn, the classic 'gas giants,'" NASA officials wrote in a news release about the new photo. "The moniker derives from the fact that a comparatively large part of the planets' composition consists of water, ammonia and methane, which are typically frozen as ices in the cold depths of the outer solar system. Jupiter and Saturn are made almost entirely of hydrogen and helium, with smaller percentages of these ices."

This isn't the first time Cassini — a collaborative mission between NASA, the European Space Agency and the Italian Space Agency — has taken a photo of another planet in the solar system from Saturn. The international probe trained its gaze on Earth in 2013, producing an incredible photo that shows Earth, Mercury and Venus shining as pinpricks of light behind Saturn.

The new Cassini photo of Uranus is more than just a pretty picture. Scientists can help calibrate other Cassini instruments using the light signature and other images from the observations, according to NASA.

One odd feature of Uranus — the seventh planet from the sun — is that it is tilted on its side. Scientists think that two large bodies probably crashed into Uranus sometime early in its history, causing it to spin on its side, with the planet's axis pointing toward the sun.

The planet's strange tilt is responsible for causing extreme seasons. For about a quarter of the Uranian year — equivalent to about 84 Earth years — the sun shines directly on just one pole, plunging the other half of the planet into a long, dark winter.

The Cassini mission launched in 1997 and made it into orbit around Saturn in 2004.