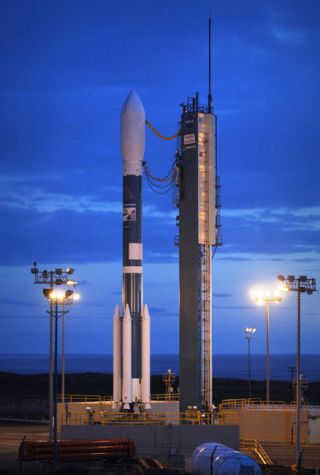 NASA's CloudSat and CALIPSO satellites sit atop a Boeing Delta 2 rocket at Launch Complex 2 of California's Vandenberg Air Force Base in preparation for an April 25, 2006 launch. The attempt was ultimately scrubbed.
(Image: © NASA/Bill Ingalls.)

Two NASAsatellites designed to make unprecedented measurements of Earth's clouds andatmosphere must wait yet another day to begin their mission after a high winds preventedtheir launch early Tuesday.

"We are inthe process of preparing for a 24-hour recycle," NASA launch commentator BruceBuckingham said after the scrub, which occurred after what had been a nearlyflawless countdown before the high winds were detected.

The $185million CloudSat mission will use a powerful, 90 gigahertz radar to penetrateclouds and identify individual cloud particles, water and snow. The $223million CALIPSO - or Cloud-Aerosol Lidar and Infrared Pathfinder SatelliteObservations - mission a cooperative effort between NASA and the French SpaceAgency (CNES), and features a laser-ranging lidar instrument and two othertools to study aerosol distribution in the Earth's atmosphere.

Oncelaunched, CloudSat and CALIPSO are expected to reach an orbit of 438 miles (705kilometers) and join France's PARASOLsatellite and NASA's Aquaand Auraspacecraft to make up the "Afternoon Train" Earth-watching system, NASA said.