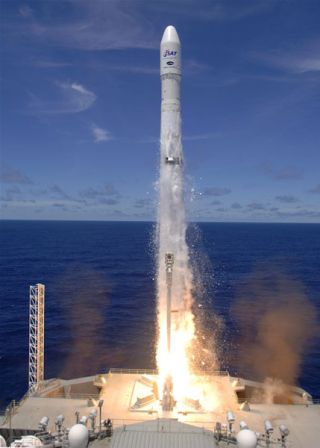 A Japanesecommunications satellite to serve Southeast Asia and Hawaii took a sea-launchedroute to space Wednesday, blastingoff aboard a 20-story rocket from a platform floating in the Pacific Ocean.

The 20th flight of a SeaLaunch Zenit 3SL rocket began at 7:30 p.m. EDT (2330 GMT). An hour later, theJCSAT 9 spacecraft was successfully delivered into a geosynchronous transferorbit with a high point of 22,200 miles (35 727 kilometers), low point of 1,047miles (1,684 kilometers) and inclination of zero degrees along the equator.

Over the next few weeks,JCSAT 9 will use its propulsion system to gradually raise its orbit togeostationary altitude, where its velocity will match that of Earth's rotation.The satellite will be positioned at 132 degrees East longitude.

JSAT Corporation of Tokyowill add the spacecraft to its orbiting fleet of satellites that providetelevision broadcasting, data relay and other business services across theAsia-Pacific region and an extended reach to North America.

The 9,703-pound (4,399-kilogram)JCSAT 9 satellite, built by Lockheed Martin, is equipped with C- and Ku-bandtransponders, plus an S-band mobile communications package. The A2100-AX modelcraft has a service life of 12 years.

JCSAT 9 is the first ofthree satellites that Lockheed Martin is building for JSAT to launch over thenext two years. This spacecraft became the 28th of Lockheed Martin's A2100series delivered thus far.

"This is our secondJSAT mission and our second consecutive launch of a Lockheed Martinsatellite," said Rob Peckham, interim president and general manager of SeaLaunch.

"We're delighted tohave achieved another successful launch on behalf of both companies, and welook forward to future opportunities to contribute to your success. I also wantto take this opportunity to thank our partners and contractors and the entireSea Launch team for executing another outstanding Sea Launch mission."