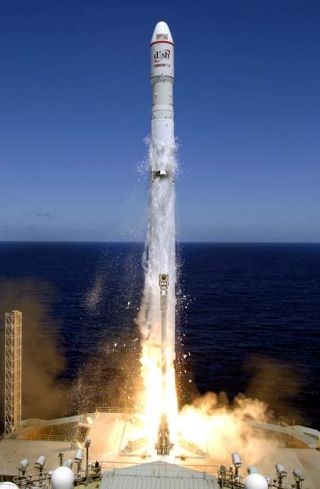 The Zenit rocket lifts off with EchoStar 10 from an oil-drilling platform in the Pacific Ocean.
(Image: © Sea Launch)

Witha booming burst of fire and smoke, a Sea Launch Zenit 3SL rocket began itsjourney toward orbit from the tranquil Pacific Ocean today on a mission to deploy a communications satellitethat will become part of DISH Network's space-based broadcasting system.

Launch of the 200-foot Zenit3SL rocket occurred on time at 2335 GMT (6:35 p.m. EST) from the Odyssey launch platform - a retrofitted Norwegianoil-drilling platform. Odyssey was positioned in the central Pacific along theEquator at 154 degrees West longitude, a perfect locale to take advantage ofEarth's increased rotation speed at lower latitudes.

The liftoff had beenpostponed for a week after two separate issues plagued the launch team duringearlier attempts. First, a hold was called in the final minutes of thecountdown last Wednesday because of an undisclosed problem with a groundsupport system. Strong ocean currents further delayed the launch from theweekend. The rocket had to be lowered from its launch mount twice during thescrubs.

On its 19th flight, themodified version of Ukraine's Zenit rocket worked flawlessly.The first two stages of the launcher fired as planned to propel the Block DMupper stage and EchoStar 10 payload into a suborbital trajectory. The Block DMthen assumed control of the mission to first put itself into a low parking orbit,then to finish the task of deploying EchoStar 10 in its planned ellipticalorbit.

It took just over one hourto successfully complete the job of placing the EchoStar 10 spacecraft into itstargeted geosynchronous transfer orbit. More than a half-hour later,Earth-bound controllers heard the first signals from the 9,553-pound satelliteto confirm the high-powered broadcasting platform was in good health followingits fiery launch.

EchoStar10 was delivered into an orbit with a high point of around 22,207 miles, aboutseven miles higher that the pre-launch predictions, a low point right on theplanned mark of 1,047 miles, and an inclination of zero degrees to the Equator.The craft will use on-board thrusters in five burns to gradually nudge its patharound the planet higher until it is circularized at an altitude of 22,300miles within about seven to ten days.

There, EchoStar 10 willmaneuver to a testing location where engineers will put the craft's systemsthrough a series of tests for up to four weeks. After a successful completionof this checkout period, EchoStar 10 will park itself above the Equator at 110degrees West, where it will appear to hover above a fixed area in the easternPacific Ocean. At that geosynchronous slot, the satellite will be co-locatedwith EchoStar 6 and EchoStar 8.

Built by Lockheed Martin, EchoStar10 carries a Ku-band communications payload tailored for direct-to-homebroadcasting needs. The new satellite's capability will add to EchoStar'sexisting lineup of core television channel offerings on the company's DISHNetwork system that currently has a roster of over 12 million customers acrossthe United States.

"I would tell ourcustomers to look for good things," Zaveri said in a post-launch TVinterview. "It was a great day and a spectacular launch."

DISH Network provideshundreds of audio and video channels - ranging from national cable networks tolocal television affiliates - directly to homes, offices and schoolsnationwide. EchoStar 10 will work with its nine counterparts in space to helpexpand those programming choices over its planned 15-year service life.

EchoStar 10 willspecifically work to provide programming to individual markets across the United States. The spacecraft features 10 uplinkspot beams that will be pointed at six locations inside the continental United States and four additional sites in Alaska, Hawaii, Puerto Rico, and Cuba. The satellite's 49 downlink spot beams will bepointed at over four dozen locations inside the United States, Puerto Rico, and Cuba, according to filings with the FederalCommunications Commission.

"This is our secondmission with EchoStar and we are very happy to have achieved another missionsuccess for DISH Network with EchoStar 10," said Sea Launch president andgeneral manager Jim Maser. "We want to congratulate EchoStar in their 25thanniversary year and their 10th year of DISH Network, providing outstandingsatellite TV service to households across the United States."

"We are pleased withthe success of the launch mission and want to thank Sea Launch and LockheedMartin for their efforts for launching our satellite," Zaveri said inpost-launch remarks. "We look forward to testing and use of the satellitewithin the next few months."

"Like our colleaguesin the launch industry, we are excited at the prospect of a promising upturn inthe launch services market," Maser said. Sea Launch flew four times lastyear, and added nine new commercial contracts to its ever-growing backlog.