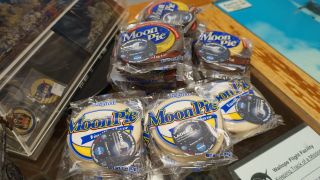 WALLOPS ISLAND, Va. — Launching a probe to the moon can be a sweet experience for scientists that have spent years developing a spacecraft, and visitors to NASA's Wallops Flight Facility can get a taste of the exciting moment themselves. You can watch the launch live now on SPACE.com here.

NASA's next moon shot, the Lunar Atmosphere and Dust Environment Explorer probe (LADEE for short) is scheduled to launch tonight (Sept. 6) at 11:27 p.m. EDT (0327 Sept. 7 GMT) from here at NASA's Wallops Flight Facility. To honor the launch of the new spacecraft, the Wallops visitors center gift shop is selling LADEE-themed Moon Pies — a marshmallow and graham cracker confection. The special treats are normally wrapped Moon Pies with a sticker marked with the words, "From Wallops to the Moon." They sell for 50 cents a piece.

Even if you can't make it to the visitor's center — which will play host to about 1,100 people for the launch — you can still see LADEE launch atop the maiden voyage of a new kind of booster: the Minotaur V rocket. If weather permits, observers along the East Coast of the United States can see the launch from South Carolina to New England. [SPACE.com's Guide to Seeing the LADEE Launch Tonight]

Editor's Note: If you take an amazing photo of the LADEE launch or any other night sky view that you'd like to share for a possible story or image gallery, send photos, comments and your name and location to managing editor Tariq Malik at spacephotos@space.com.