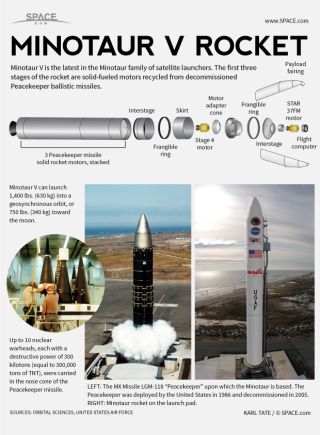 The Minotaur V rocket is the latest member of the Minotaur family of satellite launch vehicles designed and built by the Dulles, Va.-based company Orbital Sciences Corp. The first three stages of the five-stage Minotaur V rocket are solid-fueled motors recycled from Peacekeeper ballistic missiles.

When fully assembled, the Minotaur V is capable of launching small satellites on high-energy trajectories, including geosynchronous transfer orbits and trans-lunar trips. The rocket stands 80 feet (24 meters) tall and is about 7.6 feet (2.3 m) wide. When fully fueled, it weighs 197,034 pounds (89,373 kilograms).

The first Minotaur V rocket will launch from Pad 01A from the Mid-Atlantic Regional Spaceport at NASA's Wallops Flight Facility on Wallops Island, Va., on Sept. 6, 2013. The mission will launch NASA's Lunar Atmosphere and Dust Environment Explorer, a 100-day moon dust mission.