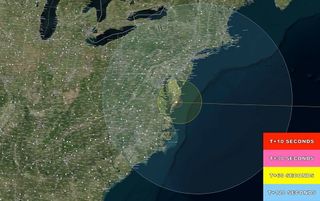 UPDATE for Sept. 7:NASA's LADEE moon mission has launched on its way. You can see amazing LADEE launch photos by skywatchers here. For our launch story, visit here.

If you happen to live along or near the Mid-Atlantic seaboard and if your sky is clear late Friday night (Sept. 6), you will have a good chance to catch a glimpse of a rocket that will be sending a NASA space probe to the moon.

The spacecraft is NASA's small, car-sized Lunar Atmosphere and Dust Environment Explorer (LADEE), a robotic mission that will orbit the moon to gather detailed information about the structure and composition of the thin lunar atmosphere, as well as moon dust conditions near the surface.

The LADEE spacecraft is slated to blast off at 11:27 p.m. EDT (0327 Sept. 7 GMT), when it will light up the night over its launch pad at NASA's Wallops Flight Facility on Wallops Island, Va. But should also be visible along large portions of the US East Coast for observers who have clear skies and know where to look. [How to Watch NASA's LADEE Mission Launch Friday]

NASA will webcast the moon shot live on Friday night. You can watch the LADEE launch live on SPACE.com here beginning at 9:30 p.m. EDT (0130 GMT), courtesy of NASA TV.

LADEE will carry three science instruments and one technology demonstration to the moon. A thorough understanding of the moon's atmosphere and dust environment will address long-standing lunar mysteries and help scientists understand other planetary bodies as well.

LADEE will be launched on a U.S. Air Force Minotaur V rocket from the Mid-Atlantic Regional Spaceport (MARS) a commercial space launch facility located at the southern tip of NASA's Wallops Flight Facility on the Delmarva Peninsula, south of Chincoteague, Va. It will be the first payload ever to be launched on a Minotaur V (integrated by Orbital Sciences Corporation), as well as the first deep-space mission ever to be launched from Wallops Island.

The Minotaur V rocket is an eight-story, five-stage rocket which will launch the LADEE spacecraft into a highly elliptical orbit where it can phase and time its trajectory burn to the moon. LADEE will spend about 2.5 months to reach the moon, and then will spend 100 days orbiting our natural satellite and conducting science experiments at an altitude of about 30 miles (50 km). After its science mission is complete the orbiter will impact the lunar surface.

How to see the rocket launch

The Minotaur V is set to be launched during a short four minute window of opportunity running from 11:27 p.m.to 11:31 p.m. EDT (0327 to 0331 GMT). It will then travel out over the Atlantic Ocean on an east-southeast trajectory. [Where to Look for NASA's LADEE Moon Probe Launch (Visibility Maps)]

During the first three minutes and 28 seconds after leaving Pad-0B at Wallops Island, the first three stages of the rocket will ignite and burnout and it is during this time frame that favorably positioned observers in the eastern U.S. and the Canadian Maritime Provinces will be able to watch the Minotaur V on its climb to space. The first three stages are former Peacekeeper solid rocket motors with over 50 flights of each stage.

The light emitted by the firing of each motor will produce a light in the sky similar to a very bright star shining with a yellow-white tinge. It might seem that the rocket dips back to Earth as it moves farther away from the observer — just as a ship appears to sink as it moves out to sea — but actually the rocket is going higher, faster and farther from populated areas. Four of the Minotaur's five rocket stages will drop off and break up far out over the ocean. The fifth stage, along with LADEE, will be inserted in high Earth orbit.

The first stage will exhaust its supply of propellant 58 seconds after launch and will be jettisoned at an altitude of 14 miles (22.5 kilometers). Within a few seconds the second stage's SR119 motor will then ignite to continue the flight toward space. [How NASA's LADEE Moon Mission Works (Video)]

The second stage SR119 motor, will burn out 2 minutes 15 seconds after launch at an altitude of 61 miles (98 km). The Hercules SR120 third stage motor will then take over, firing for a 72-second burn. After the third stage shuts down, the Minotaur V will enter a coast period (not visible to the eye) lasting almost four minutes, during which the vehicle's altitude will soar to more than 160 miles (257 km) in altitude.

When the third stage burns out, the rocket will have reached an altitude of 100.6 miles (162 km) at a point 333.9 miles (537.3 km) downrange east-southeast from Wallops Island. This will allow visibility of at least a part of the launch as far north as Van Buren, Maine, as far south as Myrtle Beach, South Carolina and as far west as Summersville, West Virginia.

The key to making a sighting is to have a clear, unobstructed view of the horizon in the direction of Wallops Island. For example, a viewer in Raleigh, North Carolina should look toward the northeast; in Providence, R.I., you should face southwest; in Pittsburgh, Pa., it'll be in the southeast.

Editor's note: If you take an amazing photo of the LADEE launch or any other night sky view that you'd like to share for a possible story or image gallery, send photos, comments and your name and location to managing editor Tariq Malik at spacephotos@space.com.

How high will the rocket be in the sky?

The closer you are to Wallops Island, the higher the arc in the sky that will be traced by the Minotaur V rocket launch.  Keep in mind that your clenched fist held at arm’s length measures roughly 10 degrees.

For much of eastern North Carolina and eastern Virginia, including the heavily populated "Northeast Corridor" that encompasses the major metropolitan areas running from Washington, D.C.,  to New York City and on into Southern New England and Boston, the rocket will appear to climb to an altitude of 10 to 15 degrees.

Across the Outer Banks of North Carolina, those sections of Virginia and Maryland that border the west side of Chesapeake Bay as well as the northern third of the Delmarva Peninsula, central New Jersey, all of Long Island, as well as the Atlantic coast of New England including Cape Cod and the Islands will see the Minotaur V reach as high as 15 to 20 degrees above the horizon. Your fist held out at arm's length covers 10 degrees of the night sky.

From the middle of the Delmarva Peninsula and the Virginia Capes, the rocket will appear to soar as high as high as 20 to 25 degrees, while those watching from southern Delaware and Maryland’s Atlantic coast will see it reach an altitude of at least 25 degrees — more than "two fists" up from the horizon.

How long will the launch be visible?

The closer you are to Wallops Island, the longer you’ll have the Minotaur V in view during the three-minute, 28-second timeframe after liftoff.  Within a 15-mile radius of Wallops, the rocket will become visible within less than 30 seconds of the launch.

Within a 120-mile radius, you might have to wait up to 60 seconds before the rocket emerges from above your horizon.

And going out to a radius of 500 miles, you may have to wait as long as two minutes before you would be able to make your initial sighting.

Organizations interested in hosting a launch viewing event may submit the event information at: http://go.nasa.gov/1f0qkih

Android users have the option of downloading the new “What’s Up at Wallops” app, which contains information on the launch as well as a compass showing the precise direction for launch viewing. The app is available for download at: http://gonasa.gov/17veCYT

SPACE.com partner Spaceflight Now is also providing blow-by-blow coverage of LADEE's mission via the Mission Status Center, which will also include a launch webcast feed.

For those planning to watch the launch in the general vicinity of the Mid-Atlantic Regional Spaceport, two prime observing locations have been set up. In partnership with the U.S. Fish and Wildlife Service, Accomack County Board of Supervisors and the Town of Chincoteague, visitors to the area may view the launch from Robert Reed Park on Chincoteague or Beach Road spanning the area between Chincoteague and Assateague Islands.

The two sites will feature the LADEE launch countdown live and NASA personnel will be on hand to discuss the LADEE moon dust mission. In addition, a live broadcast of the moon shot will be shown on a big-screen projector in Robert Reed Park beginning at 9:30 p.m. EDT on launch night.

The Robert Reed Park and Beach Road viewing sites are the official viewing sites for the LADEE launch. Area residents and visitors to the area should note that the beach on Assateague Island (Va.) will close at 7 p.m. EDT (2300 GMT) on day of launch and will not be open for launch viewing given the safety area required for LADEE’s launch trajectory.

It is also expected that the NASA Visitors Center located on Route 175 will reach capacity early and will close well before the launch. For Launch updates call: (757) 824-2050.