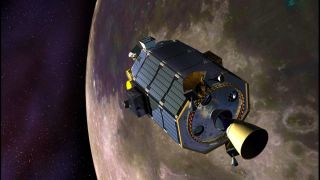 A NASA spacecraft launching to the moon on Friday (Sept. 6) could help scientists solve some age-old mysteries of the solar system.

The Lunar Atmosphere and Dust Environment Explorer (LADEE) spacecraft is expected to investigate lunar dust and the moon's extremely thin atmosphere once the craft makes it into orbit around Earth's closest celestial neighbor about 30 days after launch.

It's an ideal time to conduct LADEE's unique kind of science on the moon, according to LADEE program scientist Sarah Noble. Relatively few probes have landed on the surface of the natural satellite in recent years, leaving the moon's atmosphere somewhat undisturbed. [How to Watch NASA's LADEE Mission Launch Friday]

"Things have been relatively quiet around the moon in terms of landings in the last few decades, but it's not going to stay that way for long," Noble said. "There are actually a number of countries and a number of private companies that are planning landings to the moon in the upcoming years, so now is actually an ideal time to go and take a look at it while it's still in its pristine, natural state."

The atmosphere of the moon — called a "surface boundary exosphere" — is actually the most common type of atmosphere in the solar system, Noble said.

Surface boundary exospheres surround Mercury, some large asteroids, some moons circling giant planets, and objects in the Kuiper Belt, NASA officials have said. Earth has an exosphere, but it is located beyond the orbit of the International Space Station.

"[The moon's atmosphere is] so thin that the individual molecules that make up the atmosphere are so few and far between that they don't interact with each other," Noble said. "They never collide. … It's a class of atmosphere we actually don't know that much about, so it turns out that the moon actually is a really convenient place to go and learn about this very common type of atmosphere." [Photos: NASA's LADEE Moon Dust Mission in Pictures]

The $280 million LADEE mission is designed to help scientists solve a mystery that dates back to before the Apollo era.

NASA's Surveyor 7 mission, launched in 1968, caught sight of a "strange glow" on the horizon of the moon before sunrise, Noble said. Apollo astronauts also saw a similar radiance and "streamers" of light that stretched high up into the atmosphere before sunrise.

"We think this also might be due to very tiny particles of dust getting lofted tens of kilometers up into the sky," Noble said. "This is finally an opportunity [for us] to go and follow this mystery that has been puzzling scientists for almost 50 years. We're very excited to finally get an opportunity to understand what the dust environment is going to be like around the moon."

The  LADEE spacecraft could also gather data that might help with missions to the moon sometime in the future.

"Dust is a very difficult environment to deal with on the moon," Butler Hine, LADEE project manager said. "It's not like terrestrial dust. Terrestrial dust is like talcum powder. On the moon, it's very rough. It's … kind of evil. It follows electric field lines."

"It works its way into equipment, so one of the questions about dust on the moon is an engineering question: How do you design things so that they can survive the dust environment? That was the connection to the human efforts at the beginning of LADEE," Hine added.

LADEE was designed to look into the science of how dust transports around the moon for engineering purposes, Hine said: "The goal of LADEE was to do these measurements before future human activity occurred."

NASA is calling on amateur astronomers who have access to telescopes with apertures of 8 inches to 14 inches to look for meteoroid impacts on the lunar surface. Scientists want to record astronomical video of the lunar impacts to compare those records with any changes LADEE's instrumentation observes during its 100-day science mission on the moon.

Space fans without telescopes can also help out with LADEE by tracking meteors visible on Earth. Because the Earth and moon move through space together, it is possible to use data collected on Earth to understand small impacts on the moon, NASA officials have said.

Observers can use the Meteor Counter app to keep track of the "shooting stars" they spot in the sky. The app is free for iPhone and is a product of NASA's Meteoroid Environment Office.