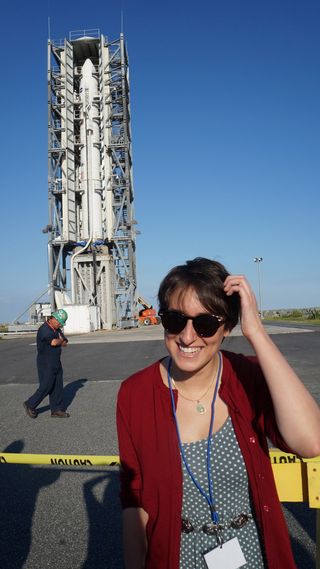 WALLOPS ISLAND, Va. — There's nothing else quite like standing in front of a brand-new rocket before it launches. NASA's Lunar Atmosphere and Dust Environment Explorer spacecraft, set to launch today (Sept. 6) from here at NASA's Wallops Flight Facility is now tucked away inside the Minotaur V rocket that will catapult it out of Earth's atmosphere, sending it on a journey to the moon.

The sun glinted off the rocket yesterday as technicians made final preparations before the launch scheduled for 11:27 p.m. EDT (0327 Sept. 7 GMT) tonight. A few of the workers took photos of one another and stopped to wave at the crowd below. Journalists and members of the public were snapping pictures and excitedly talking about the impending launch staring up at the rocket sitting on Pad 0B of Virginia's Mid-Atlantic Regional Spaceport. [Photos: NASA's LADEE Moon Dust Mission]

There is much cause for excitement about NASA's next mission to the moon. LADEE is heading into lunar orbit to investigate a moon dust mystery dating back to the Apollo era. Apollo astronauts saw a strange glow on the moon's horizon before sunrise. LADEE's scientific instrumentation could help scientists understand if that glow was caused by particles of dust in the lunar atmosphere. The launch should be visible, weather permitting, along the East Coast of the United States. Find out how you can watch the launch live here.