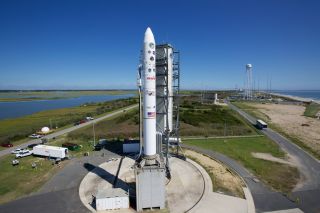 WALLOPS ISLAND, Va. — NASA's newest space probe has its eye on the moon, and the weather couldn't look finer for the planned Friday night launch. In a twist, NASA is launching this new moon shot from Virginia to investigate a long-standing mystery behind lunar dust.

NASA's Lunar Atmosphere and Dust Environment Explorer (LADEE) spacecraft is slated to launch toward the moon Friday, Sept. 6, at 11:27 p.m. EDT (0327 Sept. 7 GMT). The mission will blast off atop a brand-new Minotaur V rocket, the debut mission for the Orbital Sciences Corp. booster.

Weather forecasts look pristine for the Friday night launch, NASA officials said. There is a near-perfect 95 percent chance of good weather over the launch pad here at NASA's Wallops Flight Facility on Wallops Island, Va., they added. Depending on local weather conditions, the nighttime launch could be visible to millions of observers up and down the U.S. East Coast. [How to Watch NASA's LADEE Mission Launch Friday]

"It's looking like mostly clear skies, visibility is going to be great," Sarah Dougherty, NASA test director for the LADEE launch told reporters here today (Sept. 5). "All systems are go and the weather is looking good, so [we're] hopeful for a great launch tomorrow night."

NASA is launching LADEE from Pad 0B of Virginia's Mid-Atlantic Regional Spaceport, which is located on the agency's Wallops Flight Facility. It's the first time a moon mission has ever launched from spaceport, but the site was optimum for LADEE's intended spaceflight, NASA officials have said. If LADEE is unable to lift off Friday, the mission has backup launch opportunities between Sept. 7 and10, according to NASA officials.

A moon mystery to solve

The $280 million LADEE mission is designed to investigate the mysteries of the moon's thin atmosphere and dust.

The lunar atmosphere is actually representative of the most common known type of atmosphere in the solar system. Some large asteroids, various moons of giant planets and other objects have atmospheres like that of the moon, making LADEE's lunar science mission wide-reaching, NASA scientists have said.

Scientists are hoping to use the probe to hunt for the source of a glow that Apollo astronauts saw on the moon's horizon before sunrise. It's possible that the "streamers" of light seen by the astronauts could have been be caused by tiny particles of dust flying high in the moon's atmosphere and LADEE will look into that hypothesis.

This kind of communications test could help scientists and engineers develop new ways to communicate with spacecraft farther into deep space.

Observers outside of Virginia's Eastern Shore can may still be able to see the launch if weather permits. If you are located on the East Coast of the United States, use LADEE launch sky maps to track and possibly see the rocket as it launches into space.

SPACE.com partner Spaceflight Now is also providing blow-by-blow coverage of LADEE's mission via the Mission Status Center, which will also include a launch webcast feed.