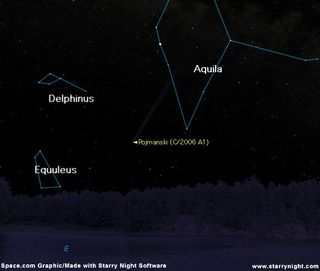 Comet Pojmansk at closest approach to Earth on March 5 as seen from mid-northern latitudes at 5 a.m. local time.

During the next couple of weeks skywatchers will be turning their attention to a newly discovered comet that has just swept past the Sun and will soon cruise past Earth on its way back out toward the depths of the outer solar system.

Astronomers, who attempt to forecast the future characteristics and behavior of these cosmic vagabonds, have found this new object to be a better-than-average performer.

The comet is now visible with a simple pair of binoculars, and it's also dimly visible to the naked eye if you know precisely where to look.

The first word about this new comet (catalogued as C/2006 A1) came from the Smithsonian Astrophysical Observatory, Cambridge, Massachusetts, which serves as the clearinghouse in the United States for astronomical discoveries.  The SAO also serves in that capacity as an agency of the International Astronomical Union.

On Jan. 2, Grzegorz Pojmanski at the Warsaw University Astronomical Observatory discovered a faint comet on a photograph that was taken on New Year's Day from the Las Campanas Observatory in La Serena, Chile, as part of the All Sky Automated Survey (ASAS).  A confirmation photograph was taken on Jan. 4.  Later a prediscovery image of the comet dating back to Dec. 29, 2005 was also found.

Interestingly, about seven hours after Pojmanski detected the comet, another astronomer, Dr. Kazimieras Cernis at the Institute of Theoretical Physics and Astronomy at Vilnius, Lithuania, spotted it on ultraviolet images taken a few days earlier from the SOHO satellite.  Despite this, however, the comet bears only Pojmanski's name.

A preliminary orbit for the new comet was quickly calculated.  At the time of its discovery, the comet was about 113 million miles (181 million kilometers) from the Sun. But orbital elements indicated that on Feb. 22 it would be passing closest to the Sun (called "perihelion") at a distance of 51.6 million miles-not quite half the Earth's average distance from the Sun.

At the time of its discovery, the comet shone at a feeble magnitude of roughly 11 to 12, which is about 100 times dimmer than the faintest stars that can be perceived with the unaided eye.  In addition, Comet Pojmanski was buried in the deep southern part of the sky, among the stars of the constellation of Indus (the Indian), and accessible only to observers in the Southern Hemisphere.

But since its discovery, the comet has steadily been progressing on a northward path.

Finally, the comet is becoming poised for visibility for Northern Hemisphere skywatchers, and it is expected to put on its best showing during the last days of February and the first week of March in the dawn morning sky.

Preliminary predictions indicated that the comet would dutifully brighten as it approached the Sun. At perihelion, the most optimistic forecasts had Comet Pojmanski attaining a magnitude of +6.5 (generally considered the threshold of naked-eye visibility).

The comet had other plans, however, and has been increasing in brightness at a much faster pace.

On Feb. 7, Andrew Pearce, observing from Nedlands in Western Australia, caught the comet already shining at magnitude +6.4. "This comet appears to be brightening rapidly," noted Mr. Pearce, adding that a faint tail was also becoming visible.  Twelve days later, the comet had brightened nearly a full magnitude, according to Mr. Pearce, reaching +5.4.  On February 20, Luis Mansilla at the Canopus Observatory in Rosario, Argentina was able to see the comet in 7x50 binoculars despite interference from the Moon and haze near the horizon.  He estimated its brightness at +5.3.

Currently, Comet Pojmanski is shining at around magnitude 5, which is roughly about the same brightness as the faintest star in the bowl of the Little Dipper. Sharp-eyed observers in a dark, clear sky can actually glimpse it without any optical aid.

The comet is located in the zodiacal constellation of Capricornus, the Sea Goat.  Beginning Feb. 27, skywatchers in the Northern Hemisphere can try locating it, very low above the horizon, somewhat south of due east about 90 minutes before sunrise.  You can use Venus as a guide on this morning: the comet will be situated roughly 7 degrees to the left and slightly below the brilliant planet (the width of your fist held at arm's length and projected against the sky is roughly equal to 10 degrees).

As viewed from midnorthern latitudes, Comet Pojmanski will be positioned a little higher above the horizon each morning at the start of morning twilight.  While it's only 5 degrees high on Feb. 27, this quickly improves to 10 degrees by March 2; 16 degrees by March 5 and 22 degrees (more than "two fists" up from the horizon) by March 9.

In the early morning sky it can be readily picked up in binoculars looking like a small, circular patch of light with a bluish-white hue and an almost star-like center.

The comet will passing closest to Earth on March 5, when it be 71.7 million miles (115.4 million kilometers) away.

In small telescopes the comet's gaseous head or "coma" should appear roughly 1/6 of the Moon's apparent diameter as seen from Earth (an actual linear diameter of 209,000 miles or 335,000 kilometers).  It will also likely display a short, faint narrow tail composed chiefly of ionized gases.

Well-known comet expert, John E. Bortle of Stormville, New York compares the view of Comet Pojmanski to that of an "apple on a stick; typical of dust-poor comets."

After March 5, the comet will be receding from both the Sun and Earth and rapidly fade as it heads back out into space, beyond the limits of the outer solar system.