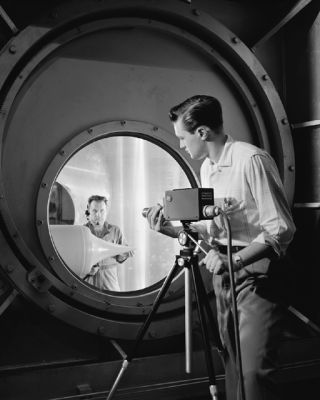 A NACA technician focuses a television camera on a ramjet engine in a wind tunnel.
(Image: © Paul Riedel.)

In this historical photo from the U.S. space agency, a television camera is focused by a NACA technician on a ramjet engine model through the schlieren optical windows of the 10 x 10 Foot Supersonic Wind Tunnel's test section on Aug. 21, 1957.

Closed-circuit television enables aeronautical research scientists to view the ramjet, used for propelling missiles, while the wind tunnel is operating at speeds from 1500 to 2500 mph. (8.570) The tests were performed at the Lewis Flight Propulsion Laboratory, now John H. Glenn Research Center.