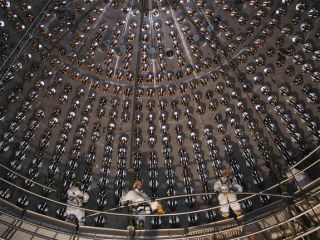 Experiments at underground laboratories such as this one in Gran Sasso, Italy could detect WIMPS, the particles that make up elusive dark matter.
(Image: © Paolo Lombardi INFN-MI)

Physicists announced today (April 3) that a particle detector on the International Space Station has possibly detected signals of dark matter.

Though exciting, the new results are still uncertain, and scientists can't be sure they actually indicate dark matter, as opposed to some more mundane cosmic phenomenon.

Scientists proposed the existence of invisible stuff called dark matter to explain why galaxies are rotating so fast, yet aren't flying apart. A strong gravitational force must hold galaxies together, but all the visible matter in galaxies can't account for such an immense gravitational pull. [6 Weird Facts About Gravity]

To explain this conundrum, scientists suggest the universe is filled with mysterious dark matter that reflects no light (it's invisible) and rarely interacts with normal matter.

One leading theory holds that dark matter is made up of WIMPs, particles that are their own antimatter counterparts, so when they collide with each other they annihilate, producing electrons and their antimatter partners, positrons.

The Alpha Magnetic Spectrometer (AMS), a particle detector aboard the International Space Station, has now detected what may be this positron signature. The detector, which measures cosmic-ray particles in space, detected 400,000 positrons over the last year and a half; and the energies of the positrons match up with what would be expected for positrons created by the annihilation of colliding dark-matter particles.

However, it's difficult to prove that the positron signature comes from dark matter, rather than from spinning stars called pulsars that spew positrons as they whirl around.

"There are several ways to do it, but essentially they all boil down to trying to capture a dark matter particle bumping into an atom of real matter," said Simon Fiorucci, a particle physicist at Brown University who works on the Large Underground Xenon detector experiment (LUX) in South Dakota.

The endeavor is a difficult one, though, because even though millions of dark matter particles may be flying through Earth at any moment, they would only rarely interact with ordinary matter, leaving very few traces of their existence.

"We already know from these direct detection experiments, they're interacting at a rate of less than 1 per year in a reasonable size target mass," said Dan Bauer, a particle physicist at Fermilab in Illinois.

The world's largest atom smasher, the Large Hadron Collider (LHC) has also searched for WIMPs but so far failed to find them, which rules out the existence of lower-mass WIMPs, Bauer told LiveScience. If the findings from AMS truly are produced by dark matter, they will narrow down the range of masses at which these particles can exist as well, Bauer said.

To find elusive WIMPS in the higher mass range, researchers are conducting studies deep underground, where the Earth's crust shields the experiments from cosmic rays that could drown out evidence of WIMP interactions, Fiorucci told LiveScience.

Several experiments are searching for WIMPs this way, including LUX in South Dakota's Homestake mine, Xenon100 in Gran Sasso, Italy, and the Cryogenic Dark Matter Search (CDMS) in an underground mine in Soudan, Minn.

Most of these experiments use a heavy liquid such as xenon or germanium that gives off light when a dark matter particle collides with an atom in the liquid. In the LUX experiment, for instance, WIMP particles bump into the nuclei of xenon atoms like billiard balls, causing both to change their motion a bit. By measuring the xenon atom's recoil, scientists can figure out if it was a WIMP that caused it.

Physicists can distinguish light emissions produced by WIMP interactions from signatures of other particles, such as gamma rays or neutrons, Fiorucci said.