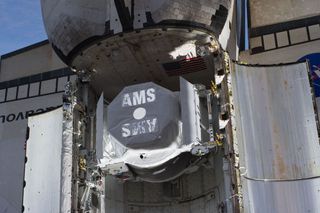 The Alpha Magnetic Spectrometer-2 (AMS) is seen in space shuttle Endeavour's payload bay. Shortly after this image was taken, the AMS was moved from the payload bay to the station's starboard truss on May 19, 2011 (Flight Day 4).
(Image: © NASA)

The detector, the Alpha Magnetic Spectrometer (AMS), measures cosmic-ray particles in space. After detecting billions of these particles over a year and a half, the experiment recorded a signal that may be the result of dark matter, the hidden substance that makes up more than 80 percent of all matter in the universe.

AMS found about 400,000 positrons, the antimatter partner particles of electrons. The energies of these positrons suggest they might have been created when particles of dark matter collided and destroyed each other.

Dark matter emits no light and can't be detected with telescopes, and it seems to dwarf the ordinary matter in the universe. [Gallery: Dark Matter Throughout the Universe]

Physicists have suggested that dark matter is made of WIMPs, or weakly interacting massive particles, which almost never interact with normal matter particles. WIMPs are thought to be their own antimatter partner particles, so when two WIMPS meet, they would annihilate each other, as matter and antimatter partners destroy each other on contact. The result of such a violent collision between WIMPs would be a positron and an electron, said study co-author Roald Sagdeev, a physicist at the University of Maryland.

The characteristics of the positrons detected by AMS match predictions for the products of dark-matter collisions. For example, based on an overabundance of positrons measured by a satellite-based detector called the Payload for Antimatter Matter Exploration and Light-nuclei Astrophysics (PAMELA), scientists expected that positrons from dark matter would be found at energy levels higher than 10 gigaelectron volts (GeV), said study co-author Veronica Bindi, a physicist at the University of Hawaii.

And the positrons found by AMS increase in abundance from 10 GeV to 250 GeV, with the slope of the increase reducing by an order of magnitude over the range from 20 GeV to 250 GeV — just what scientists expect from positrons created by dark-matter annihilations.

Furthermore, the positrons appear to come from all directions in space, and not a single source in the sky. This finding is also what researchers expected from the products of dark matter, which is thought to permeate the universe.

The $2 billion AMS instrument was delivered to the International Space Station in May 2011 by the space shuttle Endeavour, and installed by spacewalking astronauts on the orbiting laboratory's exterior backbone.

In just its first year and half, the AMS detector has measured 6.8 million positrons and electrons. As the instrument continues to collect data, scientists will be better able to tell whether the positron signal really does come from dark matter.

If the positrons aren't created by annihilating WIMPs, there are other possible explanations. For example, spinning stars called pulsars spread out around the plane of our Milky Way galaxy.

But even with more AMS data, "we will still not be completely able to figure out if it's really a dark-matter source or a pulsar," Bindi told SPACE.com. To understand dark matter thoroughly, scientists hope to detect WIMPs directly via underground experiments on Earth, such as the Cryogenic Dark Matter Search and XENON Dark Matter projects.