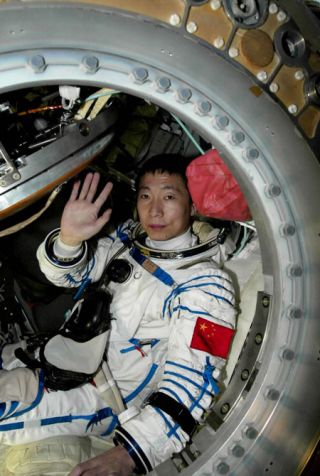 China isparing down the list of astronauts to fly aboard its second manned spaceflight,a two-person mission set to launch within weeks, state news reports saidWednesday.

Severaltwo-astronaut teams have been selected from a candidate field of 14 formerfighter pilots, though the final decision will depend on how they perform inupcoming tests, Zhang Qingwei, president of the China Aerospace Science andTechnology Corp., told the Shanghai Morning Post. The state run XinhuaNews Agency later reported the announcement.

"The launchof Shenzhou 6 spacecraft could be in September or October," Zhang told theShanghai Morning Post, adding that a flag for the 2010 World Expo in Shanghaiwill be included on the flight.

The two-personflight will follow the Oct. 15, 2003 launchof Shenzhou 5, which carried astronaut Yang Liwei into orbit and made China oneof only three countries to independently launch a human into space. Russia andthe U.S. are the others.

Tuckedinside his Shenzhou 5 capsule, which is based on Russia's Soyuz spacecraft butextensively modernized, Yang orbited Earth 14 times during his 21 1/2-hourspaceflight before returning safely.

Chinesespace officials have said in the past that the Shenzhou flights will testtechnologies that will lead toward docking and, ultimately, space stationhardware. The Chinese National Aerospace Administration hopes to land a probeon the moon by 2010, according to past reports.

As Chinacounts down to its second manned Shenzhou flight, plans are already underwayfor an extended human spaceflight program.

Meanwhile,China has also begun training its first group of female astronauts this year.

Accordingto Xinhua reports, 35 women between the ages of 17 and 20-years-old wererecruited for the country's female astronaut program.

At least fouryears of university courses, as well as flight and science training, will berequired before any of the candidates fly, though Chinese space officials hopeto launch their first female astronauts by 2010.

"They willembark on a space mission no later than 2010, working as flight commanders oron-board engineers," Hu Shixiang, deputy chief of commander of China's mannedspace program, told China Daily during the announcement.