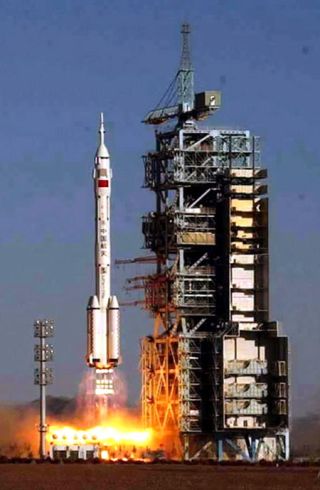 "Shenzhou 6 will be blasted into space sometime next year," said Zuo Saichun, a spokesperson with the China Aerospace Science and Technology (CAST) group that manufactures the spacecraft its Long March 2F booster. "This spacecraft will make new breakthroughs in China's manned space technology."

Saichun's comments were among several statements released by China space officials at the Fifth China International Aviation and Aerospace Exhibition in the city of Zhuhai. In a separate report, the Beijing Morning Post stated that September 2005 as a potential launch target.

"The Chinese are going from a one-man shot to a two-man shot in a relatively shorter amount of time than the U.S. or the Russians," said Dean Cheng, a China space specialist with the CNA Corp. in Arlinghton, Virginia, in a telephone interview with SPACE.com. "This would seem to indicate a faster learning curve."

China entered the realm of manned spaceflight on Oct. 15, 2003, when astronaut Yang Liwei and his Shenzhou 5 spacecraft rode a Long March 2F rocket into space from the Jiuquan Space Launch Center in Inner Mongolia.

Yang spent 21 hours in space and orbited the Earth 14 times. With his successful landing, China became the third country to independently launch a human into Earth orbit, following Russia and the United States.

While Yang flew solo, the Shenzhou space capsule - a modern design based on Russia's Soyuz spacecraft - is capable of holding up to three astronauts.

"So it's not going to be a two-man shot in the Soviet style, with the crew stuffed into a one-man capsule," Cheng said. "I would expect these guys to get out of their seats and take some basic photogenic shots."

The first multi-person spaceflight was launched by the Soviet Union in Oct. 12, 1964, with three cosmonauts tucked into their Voskhod capsule, a modified version of the one-man vehicle that carried cosmonaut Yuri Gagarin on the first manned spaceflight in 1961.

A chance for transparency

With Shenzhou 6, China now has the opportunity to showcase its space program and highlight its independent accomplishments for manned spaceflight, analysts say.

"This will be an enormous opportunity for China to be much more transparent about its space program," Cheng said.

Such openness, he added, would not only highlight China's space efforts among its citizens, but also clear up misconceptions that the nation has been relying on proven Russian technology to launch humans into space.

"It's not at all clear that the Shenzhou spacecraft were simply extended, larger versions of the Soyuz," Cheng said. "It seemed pretty clear they modified them and it would be interesting if the Chinese were to tell us what they have done."

The Shenzhou 6 spaceflight will feature the first use of new, improved spacesuits that are lighter and removable, the newspaper Beijing Morning Post stated.

During the Shenzhou 5 space shot, Yang wore a spacesuit weighing about 22 pounds (10 kilograms) for the entire 21 hour-duration of his flight. It was not designed to be removed once Yang entered his space capsule.

"The original suits were based on old Soviet technology," Cheng said. "It will be interesting to see what kind of telemetry thee new ones return, and how much of it are actually Chinese-produced components."

While the cost of the new Shenzhou 6 spacesuits has not been released, the spacecraft will carry up to three additional suits as spares during the flight. They consist primarily of a body, gloves, boots and helmet, and are designed specifically to be removed by their occupants inside the Shenzhou capsule, spacesuit designers with the Space Medicine Engineering Institute told the Post.

The crew of Shenzhou 6 will have a variety of up to 50 types of space food for meals during their week-long trip, and the added convenience of a space toilet.

China will "establish a sound mechanism to commercialize its space technology," said Yuan Jiajun, chief commander of China's space program, during a recent symposium in Shanghai, according to Xinhuanet.

Citing the recent successful - and private - flights of SpaceShipOne in the U.S., Yuan said the development of manned spacecraft around the world could propel China's space tourism.

Cheng said, while there are cultural obstacles for China to overcome to commercialize space, there is a waiting audience that could pay for space trips.

"The Chinese space program is not only government run, it is partly military run, so you're first problem is a fundamental cultural clash with the military," Cheng said. "But are there Chinese who would be interested...absolutely."