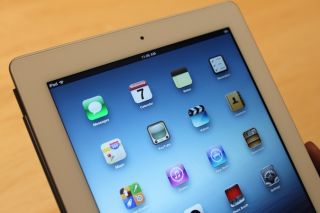 Apple launched the new iPad today (March 7), but American astronauts on the International Space Station are still waiting for a handy tablet device to make daily life above planet Earth a bit easier.

NASA astronaut Dan Burbank, who commands the space station, said that while he doesn't own a new iPad — or any other tablet — he definitely could use one in space.

"I don't have an iPad yet, and I most certainly don't have one up here on the space station," Burbank said today while answering a question from a student in San Jose, Calif., via a video link. "At some point I think that would be a really good tool to have up here because it would be a lot easier to have a single tablet, a single screen, to take with you to do procedures and science experiments instead of having a big laptop with you."

The International Space Station is primarily controlled using dozens of laptop computers distributed throughout the many modules of the orbiting lab. From end to end, the space station is as long as a football field, but the actually habitable space where astronauts live is about the same as a five-bedroom house, NASA officials have said.

While the entire space station crew may not have Apple's new iPad close at hand, the astronauts do have at least two tablets in orbit. In October, Russia's Federal Space Agency launched two iPads into space for recreational use by the orbiting laboratory's Russian crewmembers. And there are other Apple devices available, too.

"We have iPods up here and we can uplink all the music that we like to here," Burbank said.

The astronauts also have two iPhone 4 devices, which were launched to the space station last year to be used in experiments.

Burbank spoke during an educational event at the Tech Museum San Jose, where NASA's space station-themed "Destination: Station" exhibit is currently on display.

The space station is currently home to six astronauts: three Russians, two Americans and one Dutch spaceflyer. Burbank and his American crewmate Don Pettit took questions from students at the museum during today's event.