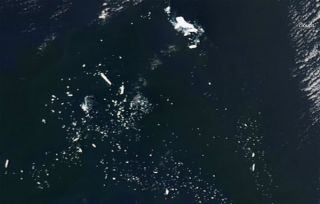 Iceberg B-15J, in the upper-middle portion of the image, is a remnant of the colossal B-15 iceberg.
(Image: © NASA.)

In mid-December, a NASA satellite snapped an image of the disintegration of a large iceberg that first broke away from Antarctica nearly 12 years ago, and has been wandering the Southern Ocean ever since.

It's not unusual for icebergs to survive for up to a quarter century if they stay near their birthplace, in the frigid waters surrounding Antarctica; yet if they stray too far north, the massive chunks of ice can quickly disappear, said Ted Scambos, a glaciologist at the National Snow and Ice Data Center at the University of Colorado, Boulder.

In March 2000, the largest iceberg ever measured broke away from the Ross Ice Shelf, a massive plain of floating ice that clings to the coastline of Antarctica. The iceberg , dubbed B-15, was a whopping 170 miles (270 kilometers) long and 25 miles (40 km) wide  –  nearly the size of Connecticut. Over time, the iceberg broke into smaller pieces.

At the beginning of November, B-15J was roughly 12 miles (20 km) across, but has now crumbled to just a few miles breadth as it sails through warmer waters, Scambos told OurAmazingPlanet.

How icebergs are born

Icebergs are birthed by ice shelves, which are the outlets of glaciers and regularly send enormous icebergs floating out to sea in a natural process known as calving.

NASA researchers recently spotted a huge rift in Western Antarctica's Pine Island Glacier ice shelf, and they expect the shelf to calve in the coming months.

Although calving is a natural process, some Antarctic ice shelves are undergoing rapid, sometimes catastrophic change, and Scambos said that tracking icebergs as they melt is a good proxy for scientists trying to understand what is happening to ice shelves in general in a warming world.

Ice shelves essentially act as doorstops for glaciers. When ice shelves disappear or weaken, glaciers speed up, dumping ever more ice into the ocean and raising global sea levels.

Scambos said B-15J is rapidly disintegrating. "It's similar to what happens to ice shelves when they go through a rapid warming," he said.

"Icebergs do a sort of fast-forward through climate change as they drift northward," Scambos said. "All the things that go on in terms of melting on the underside and melting on the surface, they all happen at high speed and dramatically with these large, tabular bergs." [Images: Antarctica, Iceberg Maker]

Scambos said researchers are trying to get some high-resolution satellite images of B-15J as it melts away, but it's difficult. The iceberg moves between 10 and 15 miles (16 and 24 kilometers) a day, and it's a challenged to aim the right satellite required for such detailed images – one operated by Taiwan – at such a small target.

The major pieces of iceberg B-15 have run through most of the alphabet, Scambos said. "It goes to at least B-15X, but the letter pieces are starting to break off into more pieces — and below 10 kilometers [6 mi] nobody tracks them, so there are literally thousands of pieces of B-15 floating around," he said.