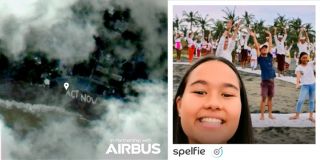 Space selfies are now a thing.

A free app called Spelfie lets users snap photos of themselves from very high above, courtesy of cameras aboard Airbus Earth-observation satellites.

Those cameras aren't powerful enough to capture your grinning face, of course (though they can pick out individual trees and cars, according to Spelfie representatives). But space selfies can provide a new perspective on your attendance at big events like concerts and football games, or serve as platforms for getting the word out about issues that are important to you.

For example, the first-ever "spelfie," taken this past June, features a group of people lined up on a beach to form the words "Act Now." These folks are villagers on the Indonesian island of Bali, and they're trying to raise awareness about the scourge of plastic pollution afflicting this tropical paradise and many other places around the world.

That pioneering spelfie was just revealed this week in the BBC documentary "Saving Our Beautiful Bali," which chronicles the efforts of teenage environmental campaigner (and "Act Now" organizer) Isabel Wijsen.

"Spelfie is a movement of people who want to change the world and make a difference through social media and imagery," Chris Newlands, CEO of Scotland-based Spelfie, said in a statement. "The power of a spelfie can help raise awareness globally, encouraging others to join in and want to make a difference, too, just as Isabel did for the Bye Bye Plastic Bags movement in Bali."

In case you're wondering how a spelfie works, that same statement provides the following explainer: "Once an event has been confirmed on the Spelfie app by partners and sponsors, the user then chooses the event they wish to attend. They then take a selfie at the designated time and place and wait for their spelfie to land from space on the same day."

The cameras aboard the Airbus satellites are optical, meaning they cannot peer through clouds. So the weather has to cooperate for your spelfie to come through as planned.