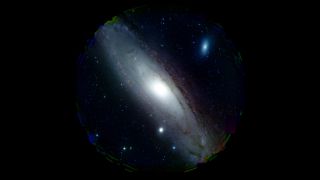 An image of the Andromeda Galaxy captured with the Hyper-Suprime-Cam. A recent snapshot of Andromeda found only one signal that could have come from a medium-sized primordial black hole, or one that formed soon after the Big Bang.
(Image: © Copyright HSC-SSP and NAOJ)

One of Stephen Hawking's most famous theories about dark matter — that this mysterious and invisible substance is made up of primordial black holes — recently suffered a huge blow. That conclusion comes from a massive telescope that captured an image of an entire galaxy in one shot.

The findings don't completely rule out Stephen Hawking's famous notion. But they suggest that primordial black holes would have to be truly tiny to explain dark matter.

Dark matter is the name given by physicists to explain a particularly mysterious phenomenon: Everything in the universe moves, orbits and rotates as if there were more mass than we can detect. Explanations for dark matter range from ghostly particles called neutrinos to unknown particles, to new laws of physics. In the 1970s, Stephen Hawking and his colleagues theorized that the Big Bang may have created a large number of relatively small black holes — each about the size of a proton. These tiny, ancient black holes would be difficult to see, yet would exert a large gravitational pull on other objects — the two known properties of dark matter. [The 11 Biggest Unanswered Questions About Dark Matter]

Until now, this theory could only be tested for primordial black holes heavier than the moon. But as technology has improved, scientists have been able to take sharper and sharper pictures of outer space. The Hyper Suprime-Cam (HSC) digital camera on the Subaru telescope in Hawaii is an advanced piece of imaging technology that can take a picture of the entire Andromeda galaxy (the nearest galaxy to our own) in one shot. Masahiro Takada and his team at the Kavli Institute for the Physics and Mathematics of the Universe in Japan used this camera to search for primordial black holes; their results were published earlier this month in the journal Nature Astronomy.

Black holes emit no light, though, supermassive black holes, like the one at the heart of galaxy Messier 87, are fringed by bright disks of hot matter. Primordial black holes, however, are billions of times smaller and have no visible, glowing matter surrounding them. Instead, searching for small black holes means looking for places where their powerful gravitational fields bend light — a phenomenon called microlensing.

Telescopes find microlensing black holes by taking many different pictures of a star over time. A black hole passing in front of that star will distort its light, making it flash; the smaller the black hole, the quicker the flash. "If a microlensing object has, let's say one solar mass," Takada told Live Science, referring to the mass of the sun, "the timescale [of the microlensing 'flash'] is like a few months or a year." But the primordial black holes they were looking for had only a small fraction of that mass, approximately the mass of the moon. That means their flashes would be much shorter. The HSC is "unique," Takada said, in that it let them take images of all the stars in the Andromeda galaxy at once, at breathtakingly fast (to astronomers) exposure intervals — each interval was just 2 minutes long.

Takada and his team took about 200 pictures of the Andromeda galaxy over 7 hours on a clear night. They found just one potential microlensing event. If primordial black holes made up a significant fraction of dark matter, Takada said, they should have seen approximately 1,000 microlensing signals.

"Microlensing is the gold standard for detecting black holes or ruling them out," said Simeon Bird, a black- hole physicist at the University of California — Riverside, who was not involved in the work. "This work rules out primordial black holes as dark matter in a range of masses where the previous constraints were not as strong nor as robust as this new one. It's a very nice result."

Was this the final nail in the coffin? Is Hawking's theory really dead? Not so, according to Bird and Takada, who say that primordial black holes of a certain range of masses still haven't been totally eliminated as candidates. [Stephen Hawking's Most Far-Out Ideas About Black Holes]

"There are still some masses where the constraints are weak, around 20-30 solar masses," Bird told Live Science. "Those could still be 1% to 10% of dark matter … and there's still a window at lower masses, like the mass of a very small asteroid."

"Our physicists are very excited because there is still a window," Takada said. The data can't rule out those teensy tiny black holes because the flashes from those black holes would be much too short, "so we need to think of another method to do it."

There was, however, one "flash" detected in their survey. While it was a single, preliminary result, it could end up being incredibly important: the very first detection of a primordial black hole, which would be a groundbreaking validation of some of Hawking's work.

"Only one observation is not that convincing," Takada said. "We need more observations to confirm. If it was really [a primordial black hole], we should continue to find the same thing" as they continue to use the HSC to look for more microlensing.