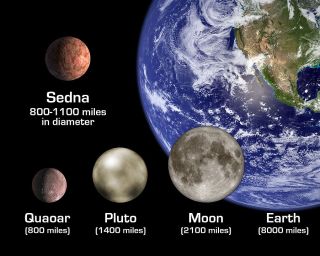 Size comparison between Sedna and other bodies in the Solar System. Image
(Image: © NASA/JPL-Caltech/R. Hurt)

A fabled tenth planet out beyond Neptune, often referred to as Planet X, hasn't been found despite years of searching. But astronomers involved in the hunt are beginning to speculate that something like Planet X will be discovered, along with Y and Z.

In fact, the entire alphabet may not suffice to denote the many worlds circling the Sun.

In an emerging new theoretical view of our corner of the galaxy, several worlds larger than Pluto -- a few perhaps as big as Mars -- lurk in the outskirts of the solar system. Some are so far away that it would take more than a year, traveling at the speed of light, to reach them.

Wrapping up one search

For years, astronomers have been scouring the Kuiper Belt, a region past Neptune that's loaded with comet-like objects. The Kuiper Belt extends out to some 5 billion miles (8 billion kilometers) from the Sun. That's a little more than 50 times the distance between Earth and the Sun, or 50 astronomical units (AU).

Since 1992, more than 800 Kuiper Belt Objects (KBOs) have been found. A handful look to be roughly half the size of Pluto. Until recently, the larger KBOs had fueled speculation that one or more Pluto-sized bodies would eventually be found.

"Given that our survey has covered almost the entire region of the Kuiper Belt, I'm willing to bet these days that nothing larger than Pluto will be found in the Kuiper Belt," says Caltech astronomer Mike Brown.

As hope fades, a study released earlier this month shows that some KBOs are smaller than had been assumed.

The size of a distant object is often based on an estimate of its reflectivity, a measure called albedo. For years astronomers had assumed KBOs were pretty dark, reflecting just 4 percent of the sunlight that hit them.

"Our results have albedos ranging from 6 percent to 18 percent for the eight objects I've analyzed," Stansberry said. If a KBO is brighter than thought, then less surface area is required to reflect the amount of sunlight that was measured -- so the object's size must be revised downward.

One object, catalogued as 2002 AW197, was thought to be two-thirds the diameter of Pluto. Stansberry has now shrunk that estimate to about one-third.

Looking into a new realm

Some of the larger objects out there have not shrunk, however, because their actual albedos were already fairly well known. One of these is way, way out there, and it is seen as a missing link to the space beyond the Kuiper Belt.

Last November, Mike Brown's team found a world at least half as large as Pluto. They named it Sedna, after the Inuit sea goddess. Sedna's elongated orbit is outside the Kuiper Belt, ranging from 76 to 1,000 AU.

Sedna was found only because it is currently near the innermost stretch of its travels.

Well past Sedna is another reservoir of material left over from the formation of the solar system, theorists believe. The Oort Cloud is a hypothesized sphere of frozen objects thought to start at about 10,000 AU and extend to 100,000 AU, or 1.5 light-years from the Sun.

Nobody expected to find an object like Sedna in the largely empty space between the Kuiper Belt and the Oort Cloud. Theorists are now scrambling to explain Sedna's presence and what it means to the composition of the outer solar system.

"Sedna could be a member of a substantial population of bodies trapped between the Kuiper Belt and Oort Cloud," says the University of Hawaii's David Jewitt, who made the first accurate estimate of a KBO albedo in 2001.

Brown, who now bets against finding Planet X in the Kuiper Belt, thinks his group's discovery of Sedna portends an even more compelling scenario.

"I'd also be willing to bet that there are many objects larger than Pluto out in the region of space where Sedna lives," Brown said last week. Out to about 1,000 AU, he speculates that there could be 10 or 20 Pluto-sized objects, "and a handful of larger things, too." Some of these suspected worlds could be as big as Mercury or even Mars, he said.

I asked Brown if there might be worlds larger than Pluto clear out at the edge of the Oort Cloud, 1.5 light-years away and nearly half the distance to the Alpha Centauri star system.

"Absolutely," he said. "Probably even likely."

New telescopes will be needed to connect the dots of the outer solar system.

"Pluto-sized planets in distant near-circular orbits are beyond the reach of current searches," said Lowell Observatory astronomer Bob Millis, who leads a team that has found more than 400 KBOs. "Future searches tuned to more distant objects and using large telescopes ... can begin to probe this region."

And while Mike Brown has his mental sights set beyond Sedna, Millis thinks there could still be a surprise lurking in the Kuiper Belt.

"It is certainly possible that one or more objects as large as Pluto remain to be found inside about 70 AU," Millis told me. "No searches performed to date are complete in this region," although he added that the survey by Brown and his colleagues, Chad Trujillo and David Rabinowitz, "has substantially reduced the likelihood" that such objects exist.