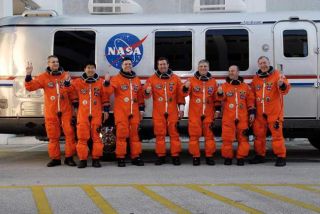 The sevenastronauts set to rocket spaceward aboard NASA’s shuttle Endeavour next weekare a varied crew of experienced veterans and first-time flyers.

Commandedby three-time spaceflyer Dominic Gorie, Endeavour’s STS-123 crew is gearing upfor a predawn launch toward the International Space Station (ISS) on March 11to deliver a new Japanese storage room and Canadian robot to the orbitinglaboratory. There are four rookies on the flight, though Gorie and two veteranspaceflyers have seven spaceflights under their collective belt.

“I would say it’s like a winning athletic team,” Gorie said. “They mix togetherwell, they know their roles and we win.”

Endeavour’sastronauts will set a new record for the longest construction mission everlaunched to the ISS during their planned16-day spaceflight. No less than five spacewalks are scheduled to installthe first module of Japan’s massive Kibo station lab, deliver Canada’stwo-armed maintenance robot Dextre and test a shuttle heat shield repair methodamong other tasks.

Gorie saidhis crew is up to the challenge of what promises to be an exciting, yet busy, twoweeks at the ISS.

“I’m reallylooking forward to working with these guys for a great bunch of days,” Goriesaid.

Hailingfrom Lake Charles, La., Gorie is a retired U.S. Navy captain who was selectedfor NASA’s astronaut corps in 1994 and first launched into space aboard theshuttle Discovery in 1998. He is making his fourth spaceflight on STS-123.

But thegoals of his upcoming fourth spaceflight aim even higher, he said.

“Thecomplexity…is unprecedented,” Gorie, 50, said of the upcoming mission. “Ihaven’t seen anything like this before and haven’t been part of anything like it,for sure.”

“If I couldpick a shuttle, it would have to be Endeavour,” Gorie said, lauding the work ofshuttle workers at NASA’s Kennedy Space Center in Florida. “It’s a great spaceship and I’ve never had any issue with it. It would be my shuttle of choice.”

A seasonedNavy aviator and test pilot, Gorie flew 38 combat missions in Operation DesertStorm in the early 1990s. He and wife, Wendy Lu, have a daughter, 18, and ason, 20.

Riding inEndeavour’s pilot seat on launch day will be U.S. Air Force Col. Gregory H.Johnson, a first-time flyer who happens to be one of two Greg Johnsons inNASA’s astronaut corps.

“It’s beenfunny. I’ve gotten his boarding pass before and he’s gotten my hotelreservation,” Johnson said of himself and fellow shuttle pilot Gregory C.Johnson, who happened to be in the same astronaut class when they joined NASAin 1998. “He gets my e-mails, I get his. That’s part of life.”

Johnson,45, goes by the call sign “Box” and remembers watching Apollo astronaut NeilArmstrong walk on the moon from his grandparents’ home in Cairo, Mich. Hejoined NASA’s astronaut ranks in 1998 and participated in the agency’sinvestigation into the 2003 Columbia tragedy.

“I don’tthink we forget risk anymore, or at least it’s certainly in the forefront ofour minds,” said Johnson, adding that there will always be risks to shuttleflights. “Everything that has value has some risk, but I think that we’rereally confident that we’ve uncovered most of the hazards and have controls forthem.”

Johnson isa veteran F-15E Eagle fighter pilot and flew 61 combat missions during twodeployments to Saudi Arabia in the early 1990s. He and his wife, Cari, have onedaughter, 10, and two sons, ages 13 and 14.

Growing upin Lowell, Mass., Linnehan was raised by his parental grandparents Henry andMae Linnehan, whom he credited with setting him on a path to space.

“Theyinstilled in me a really good work ethic. They were really old-fashioned,” saidLinnehan, 50, who will participate in three STS-123 spacewalks. “Probably if ithadn’t been for them, I wouldn’t be where I am today.”

As a child,he hoped to be a pilot, astronaut or veterinarian, but it was while attendingveterinary school that he applied to NASA’s spaceflying ranks.

“I startedlooking and they had doctors and they had geologists and physicists so I’mlike, ‘Well, you know, they need a veterinarian because, you know, why not?’” Linnehan said.

Despite hissurgical work to service Hubble, Linnehan finds the tricky assembly of Canada’slarge Dextre robot as a more daunting task.

“We’rebuilding this giant robot...it looks like some kind of old 1950s or ‘60s sci-fimovie,” said Linnehan, who likened Dextre to the cartoon ‘Gigantor, the SpaceAge Robot’ from his youth. “It’s pretty wild.”

Japaneseastronaut Takao Doi, 53, is a mission specialist representing the JapanAerospace Exploration Agency (JAXA) aboard Endeavour and will personallydeliver his country’s first habitable module to the ISS. He is making hissecond spaceflight.

Spacewalker-to-beRobert Behnken, 37, is NASA’s youngest male astronaut making his firstspaceflight on Endeavour’s mission. He will participate in three of themission’s five spacewalks as well as wield the station’s robotic arm during theflight.

“I thoughtI would be more nervous about the flight,” said Behnken, a U.S. Air Force majorwith a Ph.D. in mechanical engineering, in a NASA interview as he thanked hisinstructors. “But the biggest feeling I have is just that sense of all thethings that we need to pack into our heads.”

A native ofSt. Ann, Mo., Behnken said he is looking forward to spotting his hometown fromspace, as well as hunting for the many astronaut training sites located in theISS partner nations.

Behnken isengaged to be married, and logged over 1,000 flight hours in more than 25different aircraft types as a USAF flight test engineer.

U.S. NavyCapt. Mike Foreman, 50, will also shed his rookie astronaut status when helaunches aboard Endeavour. He is set to perform three of the flight’s fivespacewalks and will help assemble the Dextre robot.

“That’ll bea success if we get that thing together,” Foreman, a native of Wadsworth, Ohio,said of the many-piece automaton. “It reminds be of being a dad on ChristmasEve, you know, opening up the presents and putting them together for your sonor daughter and wondering what you got yourself into.”

He applied eighttimes to be a Navy test pilot, then seven more times to join the astronautcorps before he was selected in 1998.

“I waseight when I decided to be an astronaut, about 41 when I finally got selectedand now I’m 50 and going on my first mission,” Foreman said. “Keep the targetin front of you.”

A veteranNavy aviator, Foreman served as the technical lead for NASA’s advanced orbitercockpit project and logged more than 5,000 hours in over 50 different aircraft.He and his wife, Lorrie, have two sons, ages 23 and 19, and a daughter, 15.

Roundingout Endeavour’s crew is first-time flyer Garrett Reisman, who is taking aone-way trip to the space station to join the orbitinglaboratory’s Expedition 16 crew. He will relieve French astronaut LeopoldEyharts aboard the station and perform one of the STS-123 spacewalks.

“For me, it’skind of like playing the Super Bowl and then going about with the regularseason for the next couple of months,” said Reisman, 40. “It’s just been awonderful experience.”

Hailingfrom Parsippany, N.J., Reisman is a mechanical engineer and joined NASA’sspaceflying ranks in 1998. He will spend about two months on the ISS and join the outpost’s incoming Expedition 17 crew in April before returning aboardNASA’s shuttle Discovery in early June.

Tuckedamong his belongings aboard Endeavour will be a personal token of a childhoodfriend who died during the World Trade Center attacks in New York City on Sept.11, 2001, Reisman said.

“Icontacted his family, who I haven’t spoken to in decades … and they gave me apersonal effect of his that I could take along as a remembrance,” he added.

Reismansaid he, his wife, Simone, and their cat Fuzzy are looking forward to hiscoming spaceflight. His wife, he added, is an oceanographer, avid diver and aprivate pilot.

“She wouldbe strapping herself into the space shuttle right next to be given half achance,” said Reisman. “So she understands what this is all about and she’s veryexcited about it too.”