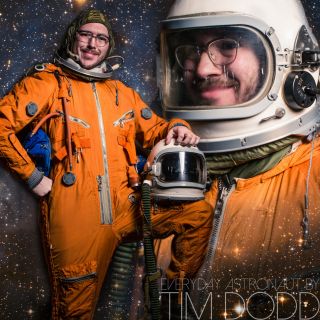 A day in the life of the Everyday Astronaut.
(Image: © Tim Dodd)

It sounds like something out of a comic book: A normal man gets a special suit and vows to use his newfound powers for good. But Tim Dodd isn't a superhero. He's the Everyday Astronaut — a man with a spacesuit, a contagious enthusiasm for space exploration, and a mission to generate excitement and interest in spaceflight among the citizens of Earth.

Tim Dodd hosts Space.com's Facebook Watch series "Spacing Out with the Everyday Astronaut," which launched May 4. He also runs the YouTube channel and Instagram account called "Everyday Astronaut," where he discusses space exploration, rocketry and technology in his trusty orange spacesuit. Dodd is a self-proclaimed "space-obsessed man-child with a spacesuit. Bringing space down to Earth for everyday people."

Dodd's childhood bedroom was decked out in space stuff. He had space bedsheets, a space shuttle poster and three Lego space shuttle sets. He also used to look at the moon through his telescope and yellow Fisher-Price binoculars.

Despite these signs, "I never wanted to be an astronaut," Dodd said. "As a matter of fact, when I was young … I used to say I wanted to be a tractor. I don't quite think I understood how that worked."

Before becoming the Everyday Astronaut, Dodd was a professional photographer in Cedar Falls, Iowa, where he grew up. "I did everything, but my main money maker was weddings," Dodd told Space.com. "It gave me a good amount of free time and flexibility in my schedule to pursue other things, which was how I got motivated to start doing rocket photography and anything else spaceflight-related."

Toward the end of 2013, Dodd's interests in space started to reawaken. The movie "Gravity" came out in October 2013, and he began paying more attention to space news. "I was sitting at a coffee shop one day, and I saw a Gizmodo article that said, 'You could own a piece of Apollo hardware,'" he said. "And, of course, that caught my attention … So I clicked on the website … and they did indeed have some Apollo hardware, but it was crazy [expensive]."

On the last day of the auction, Dodd decided to look at items that hadn't been bid on. That's when he came across the Russian high-altitude flight suit. It had one bid on it for $300. "The next bid was $330, which I then couldn't resist," Dodd said. The suit arrived at his home about a week later.

"I had no plan for it," Dodd recalled, "other than to maybe hang it up on my wall and occasionally put it on as a joke. I had zero plan. Zero future. Zero idea of what it was going to be." [Evolution of the Spacesuit in Pictures (Space Tech Gallery)]

And not much happened for several months, until late March 2014, when Dodd found himself at NASA's Kennedy Space Center in Florida. Spaceflight Now hired him to photograph the launch of SpaceX's Commercial Resupply Services 3 cargo mission to the International Space Station.

"It was my first time visiting the visitors' center as an adult," Dodd said, "and I actually walked away sad, because it felt kind of like this graveyard of greatness, all the cool stuff we had done." There was a lingering sense of, "What's next?" he explained.

Dodd's outlook completely flipped when he went to the launchpad to prep for photos. "This happened to be the very first rocket — orbital-class, liquid-fueled rocket — that had landing legs on it," he said. "And people were laughing. Literally. … But I was so excited. For me, this was like, 'Look, it's an actual 21st century rocket,'" Dodd said. "That was the thing that totally got me and dragged me into the depths of absolute obsession."

Dodd returned to Iowa energized and inspired. But there was nothing space-related anywhere near him. He had posted a few photos of himself hanging around the space center with the spacesuit on, and his family and friends loved it. "So I just started taking pictures of a day in the life of Everyday Astronaut," he said. And for several years, Dodd posted the escapades of the Everyday Astronaut on Instagram. He even made it to the top of Reddit a few times.

In August 2016, Dodd began to grow weary of his job as a photographer. He had covered nearly 150 weddings, and recently had one of his own. He saw the excitement generated by the Everyday Astronaut and wanted to pursue it full time. So, with the support of his wife, Dodd made the decision not to book any photo shoots for the following year. His wife told him, "You can have 2017, and if by the end of it it's not doing anything, then you're going back to weddings," Dodd recalled.

Everyday Astronaut continued appearing on Instagram and even showed up on the livestreaming platform Twitch playing the launch simulator Kerbal Space Program. But it was hard to attract sponsors without products to endorse. "I can't sell you a rocket," Dodd laughed. He also became disillusioned with the two platforms, which weren't fostering the interactive experience he wanted to create for his audience.

Everyday Astronaut's switch to YouTube was rather spontaneous. "On my birthday [in 2017], SpaceX announced they were going to try to send tourists around the moon," Dodd said. "And so I go, 'OK, screw this. This is a big news thing. I'm just going to make a pretty quick YouTube video' ... basically regurgitating the press release with a little bit of my opinion attached to it." [SpaceX Won't Launch Tourists Around the Moon This Year]

Within a week, his 2-minute video had around 20,000 views. "And I was pretty encouraged by that," Dodd said.

He took his viewers' feedback to heart and posted another video answering how SpaceX rockets land. He spent two weeks scripting, researching and editing, "and it absolutely flopped," he said.

Since then, Everyday Astronaut has posted 100 videos and garnered more than 121,000 subscribers on YouTube. "I've been to pretty much every NASA facility," Dodd said, though he still has NASA's Stennis Space Center (in Mississippi) and Ames Research Center (in California) to cross off his list. Dodd has also met and mingled with folks in the space industry, as well as other YouTubers. "It's a close community," he said.

Dodd plans to keep pursuing Everyday Astronaut, spreading his enthusiasm for spaceflight to those who, like him, will likely not have the chance to experience it for themselves. "I'm a college dropout," Dodd said. "I did poorly academically, but I started falling in love with this [space] stuff. And I think that's the big takeaway: You don't have to be some pedantic, perfect scientist that got a 4.0 GPA to be an enthusiast about spaceflight.

"It's a huge potential bonding experience for all of humanity," he said, "because that's what spaceflight can represent: humans going out and exploring, leaving the one boundary we all share."