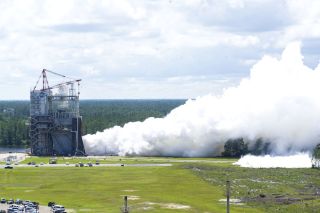 A Space Launch System rocket fires during a test on the A-1 Test Stand at Stennis Space Center.
(Image: © NASA)

Since the dawn of Space Age, the John C. Stennis Space Center has played an important position in the America's space program. Engineers at the center tested the Saturn V rockets that would carry humans to the moon and the main engines for the space shuttle. Today, Stennis tests out components of NASA's new Space Launch System that will carry humans to Mars and robotic explorers to deep space.

"Stennis continues to demonstrate that the road to space goes through Mississippi," then-NASA Administrator Charles Bolden said when he visited the center in 2013.

'The thorn before the rose'

Stennis is located in southern Mississippi, in a region owned at various times by the French, British, and Spanish governments. The East Pearl River, an important component in the selection of the agency's site, served as an international border between the United States and European colonies.

The vast timber resources of the area led to a booming lumber business that kept its early years booming, though the population had declined by the time NASA turned its eyes in that direction.

By the time President John F. Kennedy announced his intention of sending humans to the moon in May 1961, less than 1,000 people lived in the towns of Logtown, Gainesville, Santa Rosa, Napoleon and Westonia.

"The selection of the Mississippi site was a logical and practical one," according to NASA's website. The river provided water access necessary to move the large and heavy rocket components to their launch site at Kennedy Space Center in Florida. While early rocket flights took place at Marshall Space Center in Alabama, the growing boosters created too much noise for the small community, causing NASA to turn its eyes elsewhere.

On Oct. 25, 1961, NASA announced its intent to build what was then known as the Mississippi test facility in Hancock County, Mississippi. Days later, Sen. John C. Stennis met at the Logantown school with nearly 1,500 residents and promised full compensation for their land and homes.

"There is always the thorn before the rose," Stennis told the citizens in what has since become a legendary quote in the center's history. "You have got to make some sacrifices, but you will be taking part in greatness."

The choice was not ideal for the remaining residents of logging communities, many of whom were descended from the original settlers from the 1700s. "They had lived there all their lives and expected to retire and die on their ancestral lands," according to a 2012 issue of Stennis' newsletter.

To create the 13,000-acre site, the Army Corps of Engineers purchased more than 3,200 parcels of privately owned land, sometimes through acquisition of perpetual easement and lawsuits. Ultimately, NASA and the corps would need to acquire more than 3,200 parcels of privately owned land, including 786 residences, 19 stores, three schools, and an assortment of commercial buildings. Interred bodies from at least four cemeteries were exhumed and relocated.

Building the facility was the largest construction project in the state of Mississippi and the second largest in the nation at the time.

The agency has gone through multiple names since its original. In 1965, it was renamed the Mississippi Test Facility, and in 1974 it became the National Space Technology Laboratories. In May 1988, it was renamed the John C. Stennis Space Center in honor of the senator, "for his steadfast leadership and staunch support of the nation's space program," NASA said.

A facility for testing

The center's primary mission was to flight certify all of the first and second stages of the Saturn V rocket for the Apollo program. The Rocket Propulsion Test Complex, built in 1965, played an important role. The first static test firing occurred on April 23, 1966, and continued well into the 1970s.

The center originally boasted three test stands. The two smaller stands, A-1 and A-2, were built to test the Saturn V rockets. The concrete structures, towering 200 feet (61 meters) tall, are capable of withstanding thrust loads of more than 1 million lbs. (454 metric tons) and temperatures of up to 6,000 degrees Fahrenheit (3,316 degrees Celsius). Tests continued to be run on the pair until the end of the Apollo missions in the 1970s.

The B-1/B-2 test stand was built to simultaneously test the five F-1 engines of a complete Saturn V rocket.

The three test stands were designated as National Historic Landmarks in 1985.

In the 1970s, testing of the space shuttle main engine was assigned to Stennis. The engine was tested for the first time in 1975. Since then, all of the engines used to boost the space shuttle into low-Earth orbit were flight-tested at Stennis on the same stands used to test fire all first and second stages of the Saturn V in the Apollo and Skylab programs. Shuttle engine testing continued until 2009.

The E1 test stand, constructed in the 1990s, consists of four individual test stands. Since then, Stennis has signed agreements with various private manufactures for testing their rockets on the stand. Stratolaunch and Blue Origin are just two of those corporations.

"We are very excited to have demonstrated a new class of high-performance hydrogen engines," said Rob Meyerson, president and program manager of Blue Origin, in a 2012 statement. "Access to the Stennis test facility and its talented operations team was instrumental in conducting full-power testing of this new thrust chamber."

With the dawn of the Constellation Program, a human spaceflight program developed by NASA with the goals of completing the International Space Station and returning to the moon by 2020, construction began on the A-3 Test stand. A-3 was to be largest stand to be built at Stennis since it opened in the 1960s, a 30-foot-tall open steel frame structure located to the south of the A-1 test stand.

"The first stand was erected at Stennis to test the Saturn V rocket of the Apollo program. Testing of the space shuttle engines began here in the mid-1970s," then-NASA Deputy Administrator Shana Dale said at the groundbreaking for A-3. "And today, we're breaking ground for a new test stand, for the new spacecraft of a new era of exploration."

In 2010, the Constellation program was canceled, but construction continued on the stand, with the hope that it could be used for future missions. Since then, the stand has served to test NASA's SLS rocket.

On April 13, 2012, the ribbon was cut for the INFINITY Science Center, a 72,000-square-foot visitor center featuring space and Earth science artifacts and activities. Among its exhibits, the center holds the Saturn V rocket originally slotted to launch Apollo 19. After the mission was cancelled, the rocket remained at Michoud Assembly Facility until it was transferred to permanent display at INFINITY in 2016.

Stennis is not open to the general public. However, a bus tour of the facility is included in the INFINITY ticket price and can provide behind-the-scenes glimpses. However, tours do not operate on federal holidays.

INFINITY admission rates are as follows:

The science center is open Monday-Saturday from 9 a.m. to 4 p.m. and is closed on the following holidays: New Year's Day, Independence Day, Thanksgiving Day, Christmas Eve and Christmas Day.