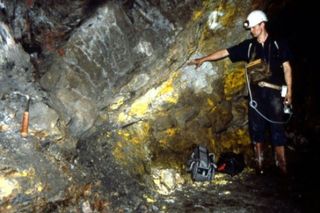 A "fossil" natural nuclear reactor site in the Okio region of Gabon. The large uranium deposit present underwent nuclear fission on and off for hundreds of thousands of years some 2 billion years ago. The yellow rock is uranium oxide.
(Image: © Robert D. Loss)

Life on early Earth seems to have begun with a paradox: while life needs water as a solvent, the essential chemical backbones of early life-forming molecules fall apart in water. Our universal solvent, it turns out, can be extremely corrosive.

Some have pointed to this paradox as a sign that life, or the precursor of life, originated elsewhere and was delivered here via comets or meteorites. Others have looked for solvents that could have the necessary qualities of water without that bond-breaking corrosiveness.

In recent years the solvent often put forward as the eligible alternative to water is formamide, a clear and moderately irritating liquid consisting of hydrogen, carbon, nitrogen and oxygen. Unlike water, it does not break down the long-chain molecules needed to form the nucleic acids and proteins that make up life's key initial instruction manual, RNA. Meanwhile it also converts via other useful reactions into key compounds needed to make nucleic acids in the first place. [How Did Life Arise on Earth?]

Although formamide is common in star-forming regions of space, scientists have struggled to find pathways for it to be prevalent, or even locally concentrated, on early Earth. In fact, it is hardly present on Earth today except as a synthetic chemical for companies.

New research presented by Zachary Adam, an earth scientist at Harvard University, and Masashi Aono, a complex systems scientist at Earth-Life Science Institute (ELSI) at Tokyo Institute of Technology, has produced formamide by way of a surprising and reproducible pathway: bombardment with radioactive particles.

The two and their colleagues exposed water and a mixture of two chemicals known to have existed on early Earth (hydrogen cyanide and aqueous acetonitrile) to the high-energy particles emitted from a cylinder of cobalt-60, an artificially produced radioactive isotope commonly used in cancer therapy. The result, they report, was the production of substantial amounts of formamide more quickly than earlier attempts by researchers using theoretical models and in laboratory settings.

It remains unclear whether early Earth had enough radioactive material in the right places to produce the chemical reactions that led to the formation of formamide. And even if the conditions were right, scientists cannot yet conclude that formamide played an important role in the origin of life.

Still, the new research furthers the evidence of the possible role of alternative solvents and presents a differing picture of the basis of life. Furthermore, it is suggestive of processes that might be at work on other exoplanets as well – where solvents other than water could, with energy supplied by radioactive sources, provide the necessary setting for simple compounds to be transformed into far more complex building blocks.

"Imagine that water-based life was preceded by completely unique networks of interacting molecules that approximated, but were distinct from and followed different chemical rules, than life as we know it," said Adam.

Their work was presented at recent gatherings of the International Society for the Study of the Origin of Life, and the Astrobiology Science Conference.

Putting it all together

The team of Adam and Aono are hardly the first to put forward the formamide hypothesis as a solution to the water paradox, and they are also not the first to posit a role for high-energy, radioactive particles in the origin of life.

An Italian team led by Rafaelle Saladino of Tuscia University recently proposed formamide as a chemical that would supply necessary elements for life and would avoid the "water paradox." Since the time that Marie Curie described the phenomenon of radioactivity, scientists have proposed innumerable ways that the emission of particle-shedding atomic nuclei might have played roles, either large or small, in initiating life on Earth.

Putting formamide and radioactivty together, as Adam and Aono have done, is a potentially significant step forward, though one that needs deeper study.

"If we have formamide as a solvent, those precursor molecules can be kept stable, a kind of cradle to preserve very interesting products," said Aono, who has moved to Tokyo-based Keio University while remaining a fellow at ELSI.

The experiment with cobalt-60 did not begin as a search for a way to concentrate the production of formamide. Rather, Adam was looking more generally into the effects of gamma rays on a variety of molecules and solvents, while Aono was exploring radioactive sources for a role in the origin of life.

The two came together somewhat serendipitously at ELSI, an origins-of-life research center created by the Japanese government. ELSI was designed to be a place for scientists from around the world and from many different disciplines to tackle some of the notoriously difficult issues in origins of life research. At ELSI, Adam, who had been unable to secure sites to conduct laboratory tests in the United States, learned from Aono about a sparingly-used (and free) cobalt-60 lab; they promptly began collaborating.

It is well known that the early Earth was bombarded by high-energy cosmic particles and gamma rays. So is the fact that numerous elements (aluminum-26, iron-60, iodine-129) have existed as radioactive isotopes that can emit radiation for minutes to millennium, and that these isotopes were more common on early Earth than today. Indeed, the three listed above are now extinct on Earth, or nearly extinct, in their natural forms.

Less known is the presence of "natural nuclear reactors" as sites where a high concentration of uranium in the presence of water has led to self-sustaining nuclear fission. Only one such spot has been found —in the Oklo region of the African nation of Gabon — where spent radioactive material was identified at 16 sites separate sites. Scientists ultimately concluded widespread natural nuclear reactions occurred in the region some 2 billion years ago.

That time frame would mean that the site would have been active well after life had begun on Earth, but it is a potential proof of concept of what could have existed elsewhere long before.

Adam and Aono remain agnostic about where the formamide-producing radioactive particles came from. But they are convinced that it is entirely possible that such reactions took place and helped produce an environment where each of the backbone precursors of RNA could readily be found in close quarters.

Current scientific thinking about how formamide appeared on Earth focuses on limited arrival via asteroid impacts or through the concentration of the chemical in evaporated water-formamide mixtures in desert-like conditions. Adam acknowledges that the prevailing scientific consensus points to low amounts of formamide on early Earth.

"We are not trying to argue to the contrary," he said, "but we are trying to say that it may not matter."

If you have a unique place (or places) on the Earth creating significant amounts of formamide over a long period of time through radiolysis, then an opportunity exists for the onset of some unique chemistry that can support the production of essential precursor compounds for life, Adam said.

"So, the argument then shifts to — how likely was it that this unique place existed? We only need one special location on the entire planet to meet these circumstances," he said.

After that, the system set into motion would have the ability to bring together the chemical building blocks of life.

"That's the possibility that we look forward to investigating in the coming years," Adam said.

James Cleaves, an organic chemist also at ELSI and a co-author of the cobalt-60 paper, said while production of formamide from much simpler compounds represents progress, "there are no silver bullets in origin of life work. We collect facts like these, and then see where they lead."