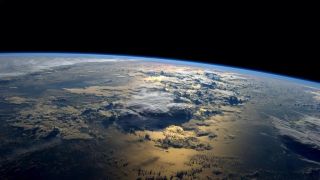 If you want a job protecting Earth from threats from outer space — or even protecting Mars from us — NASA has an opening for you — sort of. The job of planetary protection officer generated quite a bit of buzz last week, when the public learned that a role seemingly out of a science fiction novel was actually a bonafide NASA job. But the position has nothing to do with protecting Earth from little green men, but a whole lot to do with important interplanetary science.

"The planetary protection job was mostly challenging in that it was not just important for each mission to do the right — required by requirements — thing, but to know why they were doing it, and why it was important to do a good job," Rummel said. "From that aspect, the job was definitely worth it. But as to 'rewards,' those were mostly internal.”

Rummel explained that the planetary protection office reports to the associate administrator for each mission, who oversees the cost of the project. That means recommendations made by the officer are often judged in the context of whether or not they will cost the administrator more money — a vexing problem many of us might easily understand from our own work experiences.

RELATED: The Mars Colony of the Future Could Be Powered by This Advanced Microgrid

After the successful twin Viking landings of the 1970s, a few famous searching-for-life experiments came up empty. NASA shifted its attention to other locations in the solar system, and Mars didn't get a launch opportunity until the failed Mars Observer mission in 1992.

A slew of missions followed, however, including the Mars Pathfinder mission that made it all the way to the surface in 1996 and deployed a mini-rover – Sojourner. Several other landing and orbiting missions followed — some successful, others not.

Those missions wouldn't have been possible without the approval of the planetary protection officer, who ensured that Sojourner and other Martian spacecraft were sterile enough to prevent microbes from taking root in potentially life-friendly areas. One of Rummel's first tasks in 1990 was to look at the risk of contamination on Mars and how scientific understanding had changed since the days of the Viking missions.

"I knew people would like to go back and land on Mars, but I also knew we didn't have current advice," Rummel said.

So he assisted in the drafting of a 1992 report – Biological Contamination of Mars. The report concluded that a large part of the surface was "extremely inhospitable to terrestrial life" and for that reason, future missions would not need to be sterilized as much as the Viking missions.

But changes in landing technology meant that NASA had to be extra mindful of different scenarios for its missions. Pathfinder, for example, was supposed to fall to the surface using airbags. If the airbags failed, the mission would need to withstand a fall and possible burial in the soil of up to 1.5 meters (5 feet) without exposing possible Earth microbes to the Martian environment.

NASA has seen extensive evidence of briny water flow in recurring slope lineae, which are features that develop on the slopes of craters. Rummel, among others, speculated about recurring slope lineae as early as 2002. While researchers have long observed the formations, it was only in 2015 that NASA had strong enough evidence to say the formations are probably due to liquid water on the surface.

Rummel warned against sending Curiosity to investigate a nearby recurring slope lineae. The materials on the rover's surface could not be thoroughly sterilized with UV radiation due to their properties. And inside the rover is a warm electronics box that could melt any ice with which the box comes into contact.

Rummel was also part of early-stage planning for a "sample return" mission to bring pieces of Mars back to Earth, in collaboration with the French space agency CNES. While that mission never went forward, NASA has left the door open for future sample return missions. The next Mars rover, called Mars 2020, is expected to leave "caches" of interesting material behind for future missions to potentially pick up and bring back to Earth, when we presumably know a little more about how to protect ourselves.

Of course, Mars wasn't the only target of note back in the 1990s when Rummel began his work. NASA already had a Jupiter probe — called Galileo — and was about to launch Cassini, which has now been orbiting Saturn since 2004. Those missions confirmed some intriguing Voyager mission results from the 1970s and 1980s, showing that some of the moons are icy and potentially habitable.

Rummel remembers modifying the planetary protection plan for Galileo as evidence emerged that a liquid ocean might lie underneath Europa's icy surface.

At the end of Galileo's mission, an option was included to deliberately crash the probe into Io or Jupiter, just in case it happened to fall into Europa, damaging a potentially habitable environment underneath the ice. Because the mission planners were uncomfortable with changing Galileo's orbit to fall into Io, they went for a Jupiter extermination — collecting science all the way down.

NASA said the job posting has generated "a lot of excitement," including from Jack Davis a fourth grader from New Jersey and self-described "Guardian of the Galaxy." In a letter to the agency, Davis said he was fit for the job because his sister thought he was an alien, among other qualifications.

Although the planetary protection officer is no intergalactic warrior, it's a position that clearly provokes the imagination of skywatchers young and old.