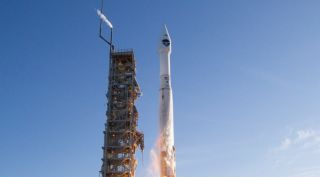 There is no impact to the strategic weather mission, and the DMSP constellation remains able to support military requirements through resilient systems and processes, the Air Force reported. The remainder of the constellation continues to provide weather and atmospheric data to users.

Operators lost the ability to command the satellite Feb. 11, 2016, following a power failure within the command and control system, the Air Force noted. Since that time the satellite has provided tactical data to field units but has not provided full-orbit weather imagery to the 557th Weather Wing, Offutt Air Force Base, Neb., and the U.S. Navy's Fleet Numerical Meteorology and Oceanography Center, Monterey, Calif.

The DMSP operations team has remained in regular contact with the vehicle and continued to monitor telemetry since the incident, the Air Force said. However, the team acknowledged a loss of attitude control was unavoidable due to the inability to command. Once the satellite loses attitude control it will begin to tumble, causing the power system to deplete and all satellite transmissions to cease. The tumble is predicted to occur late next month. The Joint Space Operations Center will track the satellite and provide conjunction warnings if required.

DMSP F-19 was launched in April 2014. While space-based weather assets were originally launched and operated by the U.S. Air Force, a 1994 presidential directive realigned primary command and control of DMSP under the Department of Commerce's National Oceanic and Atmospheric Administration.