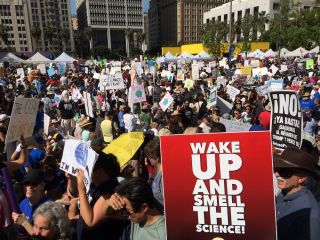 Marchers gather in Pershing Square in downtown Los Angeles for the March for Science on April 22, 2017.
(Image: © Calla Cofield/Live Science)

Science is highly collaborative, and on April 22, scientists and science supporters alike will come together for a massive collaboration in the name of science, gathering in hundreds of cities worldwide to take part in the March for Science.

The march grew from a Reddit thread in January, in which people expressed growing concerns about the future of scientific research and science policies under the current White House administration, particularly in the areas of environmental protection and climate change mitigation. Plans began to emerge, first for a march in Washington, D.C., and later for a string of satellite marches — now numbering 517 — extending across the U.S. and around the world.

The Facebook page for the March for Science has more than 500,000 likes. Thousands of people are expected to attend in many of the participating cities, marching to show their solidarity and respect for science, according to the event's organizers. [In Photos: The Best Signs from the 2017 March for Science]

In Washington, the day begins with teach-ins scheduled to start at 9 a.m. local time on the grounds around the Washington Monument. The march begins at 2 p.m. on Constitution Avenue NW at 15th Street, proceeding east to 3rd Street NW, and then turning south on 3rd Street NW to end at Union Square, according to the March for Science website.

"Any kind of opportunity where we can participate with other members of the general public and the science community coming together and showing support, it's exciting," Jennifer Vaughn, chief operating officer of the Planetary Society, told Live Science.

"It's a good time to stand up and celebrate and activate the public to get more involved and develop a deeper appreciation for science, technology, engineering and mathematics," Vaughan added.

As individuals, marchers will likely represent a range of interests and priorities, but a Marcher Pledge on the March for Science website encourages participants to embrace several unifying goals, including a commitment to fight discrimination and inequality within the scientific community, and to make research, resources and professional opportunities more accessible to people from historically underrepresented backgrounds.

"We march for countless individual reasons, but gather together as the March for Science to envision and sustain an unbroken chain of inquiry, knowledge and public benefit for all," the pledge stated.