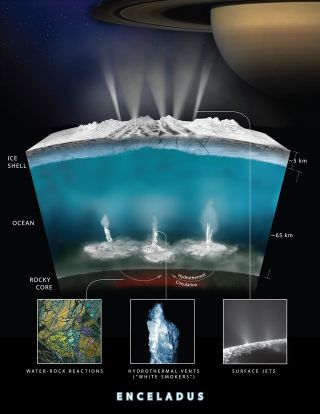 As NASA's Cassini spacecraft prepares for its grand finale at Saturn, scientists have uncovered the first evidence of a potential energy source for extraterrestrial microbial life.

The detection of hydrogen inside an ice plume jetting off from Saturn's ocean-bearing moon Enceladus means that hot water is interacting with rock, creating a potential chemical kitchen for microbial life that doesn't rely on photosynthesis to survive.

On Earth, these types of microbes flourish around hydrothermal vents on the sea floor. Scientists wonder if the same might be true 790 million miles away on Enceladus, an ice-capped inner moon of Saturn's that is just 500 miles in diameter.

"The fact that there is molecular hydrogen there — and a lot of it — can be interpreted in two different ways with regard to life," Cassini scientist Hunter Waite, with the Southwest Research Institute in San Antonio, Texas, told Seeker. "One is that there is so much hydrogen because there are no microbes there to eat it... The more positive way is that there is H2 there, there is plenty of food for them, but there's probably some other limiting growth factor so that there is excess H2 in the system."

"If you saw this [hydrogen detection] coming up from Earth, you'd say, 'Ah, there's potential food for microbes in the interior ocean.' But you wouldn't say necessarily that there are these microbes in the ocean," he added. "There is every reason to believe we're moving toward Enceladus's ocean being habitable, but we're not making any claims at this point about it being inhabited."

The discovery of molecular hydrogen in Enceladus's plumes was reported by Waite and his colleagues in this week's issue of the journal Science.

Cassini, which has been circling Saturn and its entourage of moons since 2004, will end its mission in September with a suicidal plunge into Saturn's atmosphere to avoid any chance of contaminating potential life on Enceladus. But even if Cassini could carry on for years, it was not designed to search for life.

"We've come as far as we can go, so it remains for a future mission to detect life at Enceladus," Cassini project scientist Linda Spilker, with NASA's Jet Propulsion Laboratory in Pasadena, Calif., told reporters on Thursday.

Ideally, scientists would like to drill through Enceladus's ice cap and sample its underground ocean. An easier, lower-cost mission, however, would be to do what Cassini did, which is to fly through the plumes of material that continuously shoot out into space from the moon's southern polar region.

Besides measuring the ratio of hydrogen to carbon dioxide, which Cassini was able to do, there are several different chemical relationships that would be evidence of potential food sources for microbial life. A laundry list of those processes would be one of the things that a follow-on mission would look for, Waite noted.

Other options are to look for ratios of amino acids and structural patterns in fatty acids that are indicative of biology.

"There'd be a whole host of tests, and if you got green lights on all of them, then you'd have a pretty good idea that you had a high probability that life exists," Waite said.

In the 2020s, NASA is planning to launch a spacecraft to Jupiter's moon Europa, which, like Enceladus, has a salty ocean beneath its icy surface. The US space agency has not yet planned any follow-on missions for Enceladus, but it could be selected as the destination for a current or future round of planetary missions in the New Frontiers program. Proposals are due April 28.