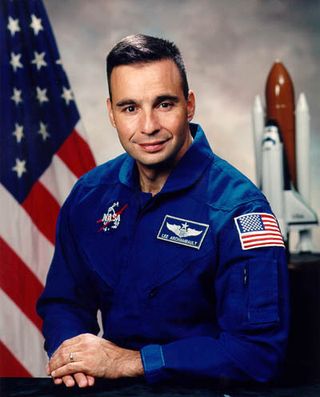 EDUCATION: Graduated from Proviso West HighSchool, Hillside, Illinois in 1978. Earned Bachelor of Science and Master ofScience degrees in Aeronautical/ Astronautical Engineering from the Universityof Illinois-Urbana, in 1982 and 1984, respectively.

EXPERIENCE: Archambault received his commissionas a Second Lieutenant in the United States Air Force from the Air ForceOfficer Training School at Lackland Air Force Base (AFB), Texas, in January1985. Upon completion, he attended the Euro-Nato Joint Jet Pilot TrainingProgram at Sheppard AFB, Texas, and earned his pilot wings in April 1986.

He then reported to Cannon AFB, New Mexico, where heserved as a combat ready F-111D pilot in the 27th Tactical Fighter Wing untilApril 1990. In May 1990, he transitioned to the F-117A Stealth Fighter in the37th Tactical Fighter Wing at Nellis AFB/Tonopah Test Range, Nevada. FromNovember 1990 through April 1991, he deployed to Saudi Arabia in support ofOperation Desert Shield/Desert Storm and flew twenty-two combat missions in theF-117A during the Gulf War.

He served a second F-117A tour in Saudi Arabia fromAugust 1991 through December 1991 in support of post-Desert Storm peacekeepingefforts. In August 1992, Archambault was reassigned to Holloman AFB, NewMexico, where he served as an F-117A instructor pilot and operational testpilot for the 57th Wing. Archambault attended the U.S. Air Force Test PilotSchool at Edwards AFB, California, from July 1994 until June 1995.

In July 1995, he was assigned to the 46th Test Wingat the Air Force Development Test Center, Eglin AFB, Florida. There, heperformed weapons developmental flight tests in all models of the F-16.Archambault was the assistant operations officer for the 39th Flight TestSquadron when he was selected for the astronaut program.

He has logged over 4,250 flight hours in more than 30different aircraft.

NASA EXPERIENCE: Selected by NASA in June 1998, he reported fortraining in August 1998.

In September 2001, Archambault was also assignedwithin the Shuttle Branch to serve as an Astronaut Support Person. In this role,Archambault supported launch and landing operations at the Kennedy SpaceCenter, and was the lead in this role for STS-111and STS-114. Beginning inOctober 2004, he picked up duties as a CAPCOM and will serve in this roleduring daily orbit shifts for STS-121.Archambault is assigned as the pilot on the crewof STS-117.