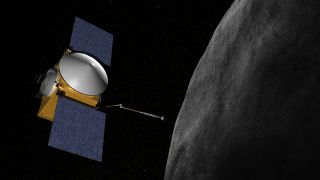 NASA's OSIRIS-REx mission aims to send samples of the potentially Earth-threatening asteroid Bennu back to Earth in 2023.

See the latest news about OSIRIS-REX's planned Sept. 8, 2016 launch and the mission below:

Why Do Space Probes Have Spectrometers? OSIRIS-REx Instrument Explained

Bring Some Asteroid To Earth: OSIRIS-Rex - 2023

Asteroid Bennu Could Be A 22nd Century Problem For Earth

Sun’s Nudge On Asteroids Can Trigger Earth-Hit... Or Miss

Why Retrieve Samples From Asteroids?

Can Killer Asteroids Be Steered Away?

Touching an Asteroid: The Science Behind NASA's OSIRIS-REx Mission

How to Follow NASA's Asteroid-Sampling Mission Launch Online This Week

In the Clean Room: Up-Close Look at NASA's Asteroid-Sampling Probe OSIRIS-REx
Space.com got to see NASA's asteroid-sampling OSIRIS-REx spacecraft in the "clean room" ahead of the probe's planned Sept. 8 launch.

OSIRIS-Rex: Bringing Home Pieces of an Asteroid
NASA's OSIRIS-Rex mission will bring home samples of the asteroid Bennu after spending two years studying it in depth.

NASA to Launch Asteroid-Sampling Mission in 3 Weeks
NASA's OSIRIS-REx spacecraft is scheduled to lift off Sept. 8 from Florida's Cape Canaveral Air Force Station. If all goes according to plan, the probe will return a pristine sample of the potentially hazardous asteroid Bennu to Earth in September 2023.

No, Asteroid Bennu Won't Destroy Earth
NASA's new asteroid-sampling mission will do a lot of interesting things, but helping prepare humanity for Earth's imminent destruction is not among them.

Video Game Challenge: Players Recreate NASA Asteroid Mission in 'Kerbal Space Program': NASA's OSIRIS-REx mission to an asteroid does not launch until September of this year, but digital versions of the spacecraft are already taking flight — or at least attempting to do so.

NASA Asteroid-Sampling Spacecraft Being Prepped for September Launch: NASA's OSIRIS-REx asteroid-sampling spacecraft is now undergoing final launch preparations at Kennedy Space Center in Florida after arriving at the site on May 20.

Space Treasures in the Rockies: Inside Lockheed Martin Spaceship Factory: The Lockheed Martin facility in Littleton, Colorado, is overflowing with NASA projects, including the Orion space capsule, a possible lunar habitat and the Osirus Rex probe that will return a sample from an asteroid to Earth.

NASA Wants to Send Your Art to an Asteroid: Aspiring artists will have a shot at getting their work blasted into space and delivered — in digital form — to the asteroid Bennu on the upcoming OSIRIS-REx spacecraft.

With Xtronaut Game, Space Exploration Is in the Cards: A new game, created by the leader of NASA's OSIRIS-REX mission, lets players take on the real-world challenges and opportunities of developing a space program: battling budget cuts, competing projects and even a government shutdown to launch research vessels into the solar system.

NASA Wants Your Future Predictions for Asteroid-bound Time Capsule: NASA is inviting the public to contribute messages and pictures to a "time capsule" aboard the OSIRIS-REx spacecraft, which is scheduled to launch in 2016. The probe will collect samples from an asteroid and return the material to Earth in 2023.

Your Name in Space: NASA Asteroid Probe Latest Mission to Fly Names: NASA is inviting the public to submit their names to fly to an asteroid and back aboard a robotic spacecraft set to leave Earth in two years.

9-Year-Old Names Asteroid 'Bennu' for NASA Mission: A near-Earth asteroid that will be visited by a NASA spacecraft in 2018 now has a more approachable name — "Bennu" — thanks to a North Carolina third-grader.

Want to Name an Asteroid? NASA Needs Help to Christen Near-Earth Space Rock: NASA is calling on students around the world to help name a potentially dangerous near-Earth asteroid that the agency is hoping to visit with an unmanned probe that will collect samples of the space rock and return them home.

Earth-Threatening Asteroid Pushed Around by Sunlight: The "Yarkovsky effect" has been measured, helping us understand the sun's effect on asteroids such as the potentially hazardous Bennu.

Astronomer Michael Drake, Lead Scientist for NASA Asteroid Sampling Mission, Dies at 65: Michael Drake served as the lead scientist for NASA's OSIRIS-REx asteroid mission. He was also director of the University of Arizona Lunar and Planetary Laboratory, and head of the department of planetary sciences.

Asteroid Mission Hints at Humanity's Past and Future: The greatest asteroid threat known to Earth also may be the source of clues about how life began on our planet. That makes the space rock called 1999 RQ36 (now renamed Bennu) an irresistible target for NASA's upcoming robotic mission to retrieve samples.

NASAcronyms: How OSIRIS-REx Got Its Name: OSIRIS-REx, a future asteroid-bound spacecraft, takes its name from an Egyptian god who spread agriculture all over Egypt. But the moniker is also a (pretty tortured) acronym.

Why NASA Chose Potentially Threatening Asteroid for New Mission: When it comes to visiting asteroids, NASA doesn't pick run-of-the-mill space rocks. The target of NASA's latest asteroid mission is not only thought to be rich in the building blocks of life, it also has a chance — although a remote one — of threatening Earth in the year 2182.

NASA to Launch Asteroid-Sampling Spacecraft in 2016: NASA will launch a sample-return mission to an asteroid in 2016, agency officials announced.