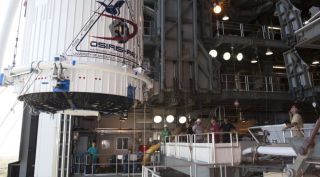 You can learn all about the asteroid-sampling mission of NASA's OSIRIS-REx spacecraft before the probe blasts off Thursday evening (Sept. 8).

NASA will webcast a number of news conferences this week leading up to the launch of OSIRIS-REx, which is expected to arrive at the 1,650-foot-wide (500 meters) asteroid Bennu in 2018 and return a sample of the space rock to Earth by 2023.

All events, including the probe's liftoff, will air live on NASA TV; you can also watch the OSIRIS-REx webcasts here at Space.com, courtesy of NASA TV. Social media followers can participate in briefings using the hashtag #askNASA. [Osiris-Rex: NASA's Asteroid Sample-Return Mission in Pictures]

Here are the schedule highlights:

Uncovering the secrets of asteroids: A discussion about what asteroids are and why they are important to understand the solar system's history and the search for life beyond Earth. Participants at KSC's Operations Support Building II are:

Sometime on this same day, NASA plans to put a prelaunch webcast up on the agency's YouTube channel: https://www.youtube.com/NASAtelevision

Launch coverage begins, starting with the loading of cryogenic fuel into the United Launch Alliance Atlas V rocket that will carry OSIRIS-REx skyward. Coverage will continue until about 1 hour after launch. The launch window extends from 7:05 p.m. to 9:05 p.m. EDT (11:05 p.m. Sept. 8 to 1:05 a.m. Sept. 9 GMT).

Two hours after launch, there will be a post-launch news conference that will include representatives from NASA and United Launch Alliance.

OSIRIS-REx is short for Origins, Spectral Interpretation, Resource Identification, Security, Regolith Explorer. The $800 million mission's main goal is to learn more about the role asteroids like Bennu may have played in bringing life's building blocks to Earth.

The probe's observations should also help researchers accomplish three other goals: nail down the orbit of Bennu, which has a slight chance of hitting Earth in the late 22nd century; learn more about the forces that affect asteroids' paths through space; and shed light on the resources space rocks may harbor, NASA officials have said.