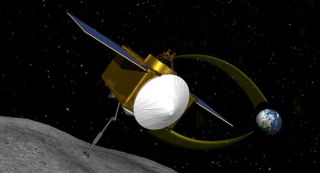 An artist's interpretation of NASA's asteroid-sample mission OSIRIS-REx, which will rendezvous with the near-Earth asteroid Bennu (once known as 1999 RQ36) in 2020.
(Image: © NASA/Goddard University)

If Osiris, ancient Egyptian god of the underworld, and Tyrannosaurus rex, king of the dinosaurs, somehow had a baby, and that baby was an asteroid-bound spacecraft, it would be named OSIRIS-REx.

Yes, OSIRIS-REx is the acronym for the vessel that, NASA just announced, will launch in 2016, travel four years to an asteroid, chip off some rock samples and bring them back to Earth. The combination robot-spacecraft is the brainchild of researchers at the University of Arizona Lunar and Planetary Lab. And so is its funky name.

The deputy principle investigator of the OSIRIS-REx team, Dante Lauretta, is a mythology buff. "Why he has this interest I have no idea," principle investigator Michael Drake told Life's Little Mysteries, a sister site to SPACE.com, "but he was doodling on a pad and trying to capture the principal themes of what we are trying to do with this mission — study life origins, identify resources, planetary security in the form of asteroid deflection – and he realized he got the name of Osiris out of that, an ancient god of Egypt who may have been one of the first pharaohs."

When asked if there was disagreement among the team members about the choice of acronym, Drake said, "The only person whose opinion mattered, frankly, was me, and I liked it right away."

REx, for "Regolith Explorer," was tacked on later, when the researchers designed a new and improved "king" version of an earlier model named, simply, OSIRIS. "Rex" means "king" in Latin. Regolith is rocky asteroid surface material.

The story of Osiris (the Egyptian) loosely parallels that of OSIRIS-REx (the asteroid mission). As a result of a mean trick involving a bejeweled coffin, Osiris was killed by his evil twin brother. His body was cut up into pieces and dumped in the Nile, and the pieces traveled down the river and spread agriculture all over Egypt.

OSIRIS-REx, Drake explained, will collect samples of regolith that, once brought back to Earth, will be distributed all over the world for scientists to analyze. Those samples may help the world understand the origins of organic materials.

And there you have it: OSIRIS-REx.

This article was provided by Life's Little Mysteries, a sister site to SPACE.com. Follow Natalie Wolchover on Twitter @nattyover.