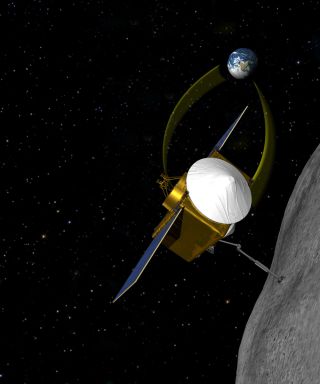 LAUREL, Md. — The greatest asteroid threat known to Earth also may be the source of clues about how life began on our planet. That makes the space rock called 1999 RQ36 an irresistible target for NASA's upcoming robotic mission to retrieve samples.

The $800 million mission, called OSIRIS-REx, aims to inject pure nitrogen into the asteroid and collect the dirt or gravel that gets stirred up. Anything collected by this "inverse vacuum cleaner" approach not only could give scientists a better idea about the odds of the asteroid striking Earth in 2170, currently put at 1-in-1,800, but might contain organic- and water-rich material similar to what possibly seeded early Earth with the ingredients for life.

"One day, probably beyond my lifetime, these types of asteroids might be seen as oases on the way out of the solar system," Nuth said. "Human crews might stop there to get water and other interesting things." [Photos: Asteroids in Deep Space]

The probe's approach to 1999 RQ36 — a space rock a third of a mile (575 meters) wide — also could serve as a test run for future asteroid missions.

"We are effectively going to be a forerunner for anything we do on small bodies in the future," Nuth told scientists and engineers attending the International Academy of Astronautics' ninth Low-Cost Planetary Missions Conference here. "As we send astronauts to the asteroids, this will help pioneer the navigation."

Besides collecting rock samples, plans for the 400 days spent near 1999 RQ36 include mapping the inside and outside and investigating the chemistry and mineralogy. Scientists also want to measure the so-called Yarkovsky effect, which describes how asteroids gain a gentle push from emitting thermal radiation from their night side.

The seven-year span between the launch and the arrival of the samples has led mission planners to set up a "multigenerational team" uniting experienced older scientists with younger scientists who can pick up the torch.

The samples ought to prove objects of scientific curiosity for the next 100 years, Nuth said.

Future instruments or technologies not yet invented may yield additional data down the line.

"We're opening up Apollo [moon] samples now that are being analyzed by techniques and asking questions that were not dreamed of when Apollo samples were brought back," Nuth said.