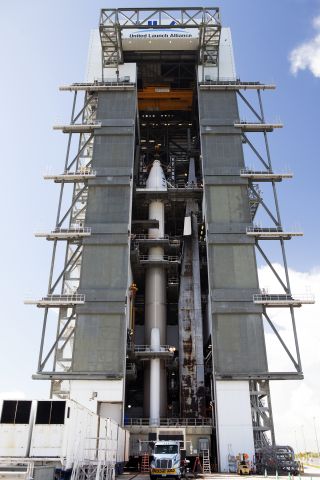 There are no issues with the OSIRIS-REx probe's  United Launch Alliance (ULA) Atlas V rocket or the range at Cape Canaveral Air Force Station, just down the road from here, NASA officials said today (Sept. 6).

Mother Nature should cooperate as well; Air Force weather forecasters are predicting an 80 percent chance of good conditions. Furthermore, there is no foreseen fallout from the dramatic explosion of SpaceX's Falcon 9 rocket at a neighboring Cape Canaveral pad. That accident occurred Sept. 1 during a routine test ahead of the planned Sept. 3 launch of a communications satellite.

"Our Atlas V vehicle, as well as OSIRIS-REx, are safely buttoned up and secure inside the VIF," said Scott Messer, program manager for NASA missions at ULA, referring to the Vertical Integration Facility, where rockets are stacked ahead of launch. "We haven't identified any damage or any concerns as a result of the incident last week."

The $800 million OSIRIS-REx (Origins, Spectral Interpretation, Resource Identification, Security, Regolith Explorer) mission is scheduled to lift off Thursday at 7:05 p.m. EDT (2305 GMT). There is some margin for error in case of a delay; the launch window is 115 minutes long.

If all goes according to plan, OSIRIS-REx will rendezvous with a 1,640-foot-wide (500 meters) asteroid named Bennu in August 2018, grab a sample of space rock material two years later and return that material to Earth in September 2023.

Bennu is thought to harbor carbon-containing organic molecules, the building blocks of life as we know it. So the mission should shed light on the role space rocks like Bennu may have played in helping life get a foothold on Earth, NASA officials have said.

That's the primary goal. But OSIRIS-REx's observations should also help scientists better understand the threat the potentially dangerous Bennu poses to Earth. The mission should also clarify the forces acting on asteroids in deep space, leading to improved orbit predictions for space rocks in general, mission team members have said.

Principal investigator Dante Lauretta, who's based at the University of Arizona's Lunar and Planetary Laboratory, has been working on OSIRIS-REx since 2004, when the mission was just a concept. He said he can hardly believe the spacecraft is finally about to get off the ground.

"It's something I've dreamed about since I was a little kid," Lauretta said. "To be able to climb around on the Vertical Integration Facility and see a rocket getting stacked that's got my spacecraft on top of it that we're about to send off to an asteroid — sometimes I have to just pinch myself to convince myself that I'm not dreaming all of this."