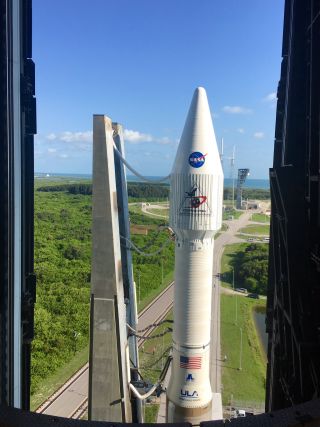 OSIRIS-REx and its United Launch Alliance Atlas V rocket rolled out to the pad this morning (Sept. 7) here at Cape Canaveral Air Force Station. The duo moved at a leisurely pace from the nearby Vertical Integration Facility, where OSIRIS-REx was stacked atop the rocket on Aug. 29.

Once aloft, the $800 million OSIRIS-REx mission will begin chasing down a 1,640-foot-wide (500 meters) asteroid named Bennu. If all goes according to plan, the spacecraft will rendezvous with Bennu in August 2018, study the space rock from orbit for the next two years and then grab at least 2 ounces (60 grams) of Bennu material.

In September 2023, this sample will be delivered to Earth, giving scientists access to a pristine piece of the early solar system. Analyses of the material, performed by researchers around the globe, should help clarify the role that carbon-rich asteroids like Bennu played in the origin of life on Earth, OSIRIS-REx team members have said.

OSIRIS-REx is short for Origins-Spectral Interpretation-Resource Identification-Security-Regolith Explorer[LD2] . As that lengthy name suggests, the mission has a number of secondary objectives.

For example, there's a slight chance that Bennu could hit Earth late in the 22nd century. Team members hope OSIRIS-REx's observations can help to fine-tune their understanding of the asteroid's orbit and, therefore, give them a more precise idea of the threat it poses to the planet. A better understanding of the factors that tweak Bennu's path through space should also aid the mapping of other asteroids' paths, mission team members added.

Furthermore, the spacecraft's precise mapping of Bennu could also shed light on the resources such asteroids possess — information that may help guide future asteroid-mining efforts, NASA officials have said.