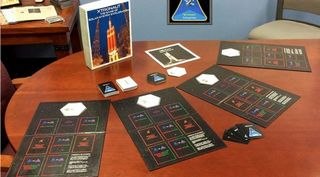 Xtronaut, which comes with everything you see here, aims to teach gamers seven and up about the technical and political hurdles involved with exploring the solar system. And also to raise an education and public outreach budget for NASA's Osiris-Rex asteroid sample return mission.
(Image: © Dante Lauretta)

WASHINGTON — The head of NASA's Osiris-Rex asteroid sample-return probe plans to crowdfund a public outreach budget for the mission on Kickstarter by selling a card game in which players compete to build their own space missions.

The game, Xtronaut, was designed by Dante Lauretta, a University of Arizona Tucson professor and principal investigator for Osiris-Rex: A roughly $1 billion NASA New Frontiers mission set to launch in September 2016 and return an asteroid sample to Earth in 2023.

NASA missions historically reserved a slice of their budgets for education and public outreach, or EPO: Essentially, promoting the mission to the public through experts directly involved with the program. However, Osiris-Rex's EPO budget got deleted in 2013 as part of a broader federal policy change initiated that year to consolidate U.S. education spending within the Department of Education.

"This happened right as we were going through our confirmation review — where our baseline budget is set," Lauretta wrote in a Sept. 8 email. "Since this policy was in effect, the agency made the decision to remove EPO as an element of the mission."

Osiris-Rex lost its EPO funding despite the fact that Congress has never gone along with the administration's proposal to move EPO money for NASA science missions out of the agency, agency spokesman Dwayne Brown confirmed Sept. 8. Reports attached to omnibus spending bills that funded the government in 2014 and 2015 directed NASA to reserve a small slice of the roughly $5 billion approved for the agency's Science Mission Directorate for EPO, including some $40 million this year.

The Xtronaut Kickstarter campaign launched Sept. 12 and run for 30 days. The minimum contribution is $5 and Lauretta wants to raise at least $15,000. Stretch goals run through $75,000 and mostly unlock expansions to the 90-card deck that comes with the base game.

In the game, players compete to become the first to earn 100 points by launching robotic spacecraft to various solar system destinations. Players can impede one another with so-called "action cards" that simulate the various political pitfalls NASA missions often confront as they strive to get off the ground.

To crank out early versions of the game for play testing, Lauretta founded Xtronaut Enterprises with Michael Lyon, a venture capitalist who has also invested in the piloted Lynx suborbital spaceplane under construction at XCOR Enterprises in Mojave, California. Xtronaut Enterprises also got financial contributions from the aspirant asteroid mining outfit Planetary Resources, Redmond, Washington, and cable and internet giant Cox Communications of Atlanta, Lauretta wrote in his email. He declined to quantify the total investment to date.

According to the Xtronaut Kickstarter page, United Launch Alliance of Denver also backed the project. Osiris-Rex will launch on Atlas 5 from Cape Canaveral Air Force Station in Florida.

Xtronaut wouldn't be the first card game based on a NASA mission. The team behind the Fermi Gamma-ray Space Telescope, which launched in 2008, created the Fermi Race Card Game. As with Xtronaut, Fermi Race pits players against one another in a competition to build a spacecraft bedeviled by political and technical snafus, and the occasional bit of bad luck.

To learn more about the Xtronaut game, or to contribute, visit:
https://www.kickstarter.com/projects/827615927/xtronaut-the-game-of-solar-system-exploration