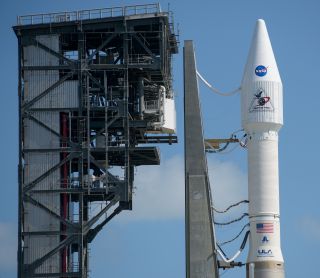 CAPE CANAVERAL, Fla. — NASA's OSIRIS-REx mission is ready to start its seven-year space journey. If the good weather holds, the spacecraft will launch into space today (Sept. 8) at about 7:05 p.m. EDT (2305 GMT), and begin its round-trip journey to study an asteroid and snatch a sample to bring back home.

"We are prepared to launch this fantastic asteroid-retrieval mission," Tim Dunn, the NASA launch manager at Kennedy Space Center (KSC), said at a media briefing at KSC Tuesday (Sept. 6). You can watch a webcast of OSIRIS-REx launch here beginning at 4:30 p.m. EDT (2030 GMT), courtesy of NASA TV.

The OSIRIS-REx mission (which stands for Origins, Spectral Interpretation, Resource Identification, Security, Regolith Explorer) will travel about 4.5 billion miles (7.2 billion kilometers) to the asteroid Bennu, NASA representatives said at a science briefing on the mission. After studying and mapping the asteroid in depth, the spacecraft will move close enough to scoop material off the space rock's surface before returning home. The sample should provide insights into the early life of the solar system. [NASA's OSIRIS-REx Asteroid Mission Launch: Complete Coverage]

Created at roughly the same time as the solar system's eight planets, asteroids are thought to contain within them the seeds of the early solar system. The sample that OSIRIS-REx will take from Bennu in 2020 will provide clues about how planets like Earth formed, a mystery that continues to puzzle researchers, NASA representatives said at the science briefing. Scientists think the asteroid is covered with organic material. If its fellow asteroids rained down on Earth billions of years ago, the space rocks could have brought water and the ingredients for life to the young world.

On Wednesday (Sept. 7), the mission's Atlas V rocket with the attached payload moved nearly a quarter mile, leaving the safety of its storage building for the pad where, hopefully, it will blast into space. The final preparation begins at midday today, as the launch crew begins the final power preparation at noon EDT, followed by fueling at around 5 p.m. EDT. At 7:05 p.m. EDT today, the clock begins counting down the 115-minute launch window. If everything runs smoothly —and the weather cooperates — the Atlas V carrying OSIRIS-REx will lift off tonight. If, however, there are complications, the rocket may have to wait. Large problems will require investigation, but if the issue is minor, or weather-related, the crew is prepared to retry every 5 minutes, Scott Messer, a NASA program manager at United Launch Alliance in Colorado, said during the media briefing Tuesday.

The skies look pretty good so far. Forecasters are predicting 80 percent chance of good weather when it's time to launch. Clay Flinn, the launch weather officiator at Cape Canaveral Air Force Station in Florida, said the principle concern will be the presence of cumulus clouds that are expected to blow in off the Atlantic Ocean, heading west. If technical issues delay the launch, conditions on Friday and Saturday are anticipated to be only slightly worse, with a 70 percent chance of launch.

"It looks pretty favorable for the first attempt on Thursday evening," Flinn said.

If the rocket does not launch on Thursday, there is a 34-day window for the probe to launch and still reach its target.

Space can be a dangerous path to travel. Last week's explosion of the Space X Falcon 9 rocket seems to have brought a sharp dose of reality.

"Nobody likes to see your colleagues go through a day like that," Dunn said during the briefing. "It was a stark reminder to me and the whole team about the risks that we face in the business."

Messer said the team performed an extensive walk-down of the platform to ensure no debris would cause problems. The engineering team also reviewed the equipment and determined there were no concerns. The Atlas V is well-tested, having flown more than 60 launches since its 2002 debut.

"There is no elevated risk to OSIRIS-REx to launch on the Atlas V," Dunn said.

OSIRIS-REx principal investigator Dante Lauretta said that he isn't nervous, because he trusts the engineering team that assembled the rocket that will carry the mission into space. That doesn't mean he's totally calm, however, he said.

"I'm anxious because I've been working on this for 12 years," he said before emphasizing his strong faith in the OSIRIS-REx team and its analysis of potential risks. The team has worked to actively identify, manage and mitigate the worst of the challenges that will face the probe throughout its lifetime, he said.

"A hallmark of OSIRIS-REx is effective risk management," Lauretta said. "But we understand those risks."