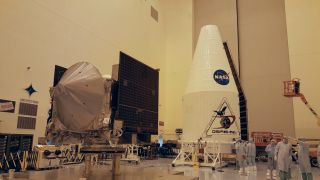 The OSIRIS-REx spacecraft was encapsulated in its payload fairing on Aug. 24, 2016.
(Image: © Amy Thompson/Space.com)

After lifting off atop a United Launch Alliance Atlas V rocket, OSIRIS-REx will spend nearly two years chasing down a carbon-rich,potentially hazardous asteroid named Bennu. If all goes according to plan, the probe will grab samples of Bennu, then return this material to Earth in 2023. (The probe's name is short for Origins-Spectral Interpretation-Resource Identification-Security-Regolith Explorer.)

NASA invited members of the media to view OSIRIS-REx on Aug. 20, inside a specialized clean room before sealing the spacecraft away in its payload fairing — a metal casing that protects the spacecraft during launch. This room, called the Payload Hazardous Servicing Facility (PHSF), is essentially a massive high bay that houses a variety of vehicles tasked with varying missions. Anyone who enters the PHSF has to follow a strict protocol that includes wearing gear known as a bunny suit. [OSIRIS-REx: NASA's Asteroid Sample-Return Mission in Pictures]

This protocol was especially strict for OSIRIS-REx because of the nature of its mission and the sensitivity of its instruments.

At 7:30 in the morning local time on Aug. 20, the first group of journalists arrived at KSC's press site, where a bus was waiting to transport us to the facility. Excitement grew at the first stop of the day, a briefing about the mission. Here, we were introduced to the OSIRIS-REx team and reviewed important safety protocols for the clean-room visit.

After the briefing, we headed to the PHSF. Once inside, we were split into two small groups. The first group went straight to the clean room, while the second stayed on the observation deck and watched short presentations. When it was our turn to enter the dressing room, everyone was instructed to first clean his or her shoes with a special motorized brushing machine, which removed outside dirt and other materials. We then donned cloth booties to cover our shoes before moving to the locker room.

There, we had to dress in the latest clean-room fashion. We had to don various pieces of protective clothing in a specific order to prevent secondary contamination. OSIRIS-REx will be searching for evidence of the building blocks of life — in particular, amino acids and other organic molecules — so it's important to keep the spacecraft as clean as possible.

We then put on a special hood, full body suit, a second set of booties over our body suit, and gloves. Once we were properly outfitted, with our gloves taped up (so they couldn't come off), we collected our camera equipment (which had been cleaned by PHSF staff) and headed to a small hallway, where we were blasted with the "air shower." Then the door opened, and there was the spacecraft.

The massive payload fairing greeted us, while the shiny, silver spacecraft was to our left. Stepping through the clean-room door was like walking into history; this room once housed some big-name science missions, including NASA's previous two robotic sample-return space missions: Stardust and Genesis. (Stardust collected comet dust, while Genesis grabbed particles from the solar wind.)

"This mission is about sample return, and that's the gift that keeps on giving," OSIRIS-REx principal investigator Dante Lauretta, a professor of planetary science and cosmochemistry at the University of Arizona's Lunar and Planetary Laboratory, told Space.com. "Future scientists that are a lot smarter than I am will have access to this material and will be able to continue the exploration that this team began." [OSIRIS-REx Will Bring Pieces of Bennu Home (Video)]

He explained that Bennu is important not only because of its close proximity to Earth but also because the 1,650-foot-wide (500 meters) asteroid is a perfectly preserved geologic remnant of the early solar system. Estimated to be 4.5 billion years old, Bennu is a carbon-rich asteroid that could harbor organic material similar to the stuff that served as a precursor to life on Earth.

"Bennu is like a time capsule from the beginning of the solar system," Lauretta said.

"We want to find out the role that carbonaceous asteroids play in seeding planets like the Earth" with life's building blocks, he added.

If organic molecular evolution occurred on asteroids such as Bennu, and these space rocks delivered complex organics to Earth, then maybe such "seeding" also occurred elsewhere, Lauretta said. It could have also happened on Mars, Jupiter's ocean-harboring moon Europa, the Saturn satellite Titan and other places possibly capable of supporting life, he said.

"We will be able to understand the fundamentals of planet formation, the solar system and, really, the ingredients for the origin of life," added OSIRIS-REx deputy program scientist Christina Richey, who's based at NASA Headquarters in Washington, D.C. "Who wouldn't want that?"

After OSIRIS-REx arrives at Bennu in 2018, instruments on the Lockheed Martin-built spacecraft will produce the most detailed map ever of an asteroid's surface. This work will help scientists study Bennu's composition as well as select the best location on the asteroid to retrieve the sample.

Then, in 2020, the spacecraft will descend to the asteroid's surface to give it what the mission team calls a "smooth, gentle high-five." Using an 11-foot-long (3.4 m) arm called the TAGSAM (Touch And Go Sample Acquisition Mechanism), the spacecraft will blast Bennu's surface with nitrogen gas and then collect at least 2 ounces (60 grams) of the displaced material.

Lauretta has been working on the $800 million mission since 2004 and said he is excited to see the spacecraft launch in a few weeks.

"I'm so proud to be leading a team for this type of endeavor," he said. "To be here at KSC and to go out and see the rocket being assembled and the fuel loaded onto the spacecraft ... this is just awesome."