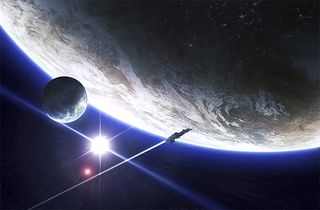 Has Kepler revealed evidence for a technologically advanced civilization around a star only 1500 light-years away? That's one exciting, if unlikely, interpretation of recent transit data.
(Image: © CORBIS)

You're probably all too familiar with the story of KIC 8462852, a star that's been the focus of much speculation and excitement over the past few months.

KIC 8462852 was observed by NASA's Kepler mission and has become infamous for its bizarre and unprecedented transit signal that was flagged by citizen scientists. Now new research of precision Kepler observations has shown that the overall brightness of the star — unofficially named "Tabby's Star" after astronomer Tabetha S. Boyajian who discovered the peculiar signal — has been decreasing, which poses a new and confusing problem for astronomers trying to understand what the heck is going on.

Kepler's prime mission is to look for small worlds that pass in front of their parent stars causing a slight dimming of starlight. The "transit method" has been hugely successful and has confirmed well over 2,000 planets orbiting other stars in our galaxy.

But Tabby's Star's transit signal, otherwise known as a "light-curve", stopped astronomers in their tracks. Something passed in front of it, dimming its starlight a whopping 20 percent and other jumbled transit signals revealed that something wasn't quite right with this particular star. Then, in an interview with The Atlantic, Penn State University astronomer Jason Wright speculated that the signal could be indicative of an "alien megastructure" that's in the process of being built. You can catch up on the controversy surrounding the anomalous signal in my recent Discovery News article "Closing In on 'Alien Megastructure' Clues."

WATCH VIDEO: We're Not Saying the Kepler Discovery Is Aliens... But...

So, until now the leading (natural) explanation of the strange light-curve has focused on the possibility of a huge swarm of comets passing in front of the star, blocking a substantial portion of starlight from Kepler's optics. Recently, this hypothesis was given a little more credence after observations by the Submillimeter Array and the James Clerk Maxwell Telescope in Hawaii revealed little evidence it might be caused by the debris cloud of some planetary smashup. But the "swarm of comets" explanation still fell short of fully explaining the phenomenon, though for now it remains the leading rationale.

All this uncertainty has only boosted speculation surrounding the (unnatural) explanation: that an advanced alien civilization is building some kind of Dyson Sphere-like structure around a star to (perhaps) collect solar energy for all of its energy consumption needs. In this scenario, pieces of the alien array are passing in front of the star, causing the anomalous transit signal. Of course, scientists being a rational bunch think there's a more likely explanation for the light-curve, but aliens will always hog headlines.

So, in an effort to track down a rational explanation, Bradley Schaefer from Louisiana State University decided to study historical observations of KIC 8462852 in astronomical photographic plates from the past century to see if the star exhibited any bizarre fluctuations in brightness in the past. Sure enough, yes, the star is a bit of an oddball and has shown a long-term decreasing trend in brightness! Since the 19th Century, its brightness has decreased steadily by nearly 20 percent.

Now, astronomers Ben Montet (from Caltech) and Joshua Simon (from the Carnegie Institute) have released a paper to the arXiv preprint service detailing recent Kepler observations of KIC 8462852 since the space telescope was launched in 2009. Although the dataset for this time period is comparatively small, Monet and Simon found yet another surprise.

In the 4 years of Kepler's primary mission, the star showed an unprecedented dimming of 3.5 percent. So not only did Kepler detect transient dips in brightness of up to 20 percent, there also seems to be a very definite downward trend in brightness throughout our observational history of the star.

No matter how you slice it, this is strange.

After studying photometric observations for other stars surrounding KIC 8462852, there's no other star that shows such dramatic behavior. What's more, there's very few known phenomena that could be causing this. So once again, astronomers are clutching at straws in an effort to explain what is going on.

"Broadly speaking, the morphology of the light curve is generally consistent with the transit of a cloud of optically thick material orbiting the star," Monet and Simon write in their paper. "The breakup of a small body or a recent collision that could produce a cloud of material could also plausibly produce a family of comets that transit the host star together as one group, explaining the light curve..."

However, like all rational explanations for the behavior of KIC 8462852, there's an infuriating "but."

According to the researchers, for the cloud theory to hold true, it would need to be orbiting the star at "impossibly large distances" from the star or would need to have a strange structure that increases in density as it transits across the face of the star. This poses a challenge and they say that the idea is far from complete.

So now we're back, once again, in the rather uncomfortable territory of speculating about the root cause behind yet another Tabby's Star mystery.

Though the majority of studies are focused around trying to understand what caused the dramatic transit signals — Swarm of comets? Planetary smashup? — these explanations don't really help when trying to understand why there's a dramatic long-term dimming. Could this new mystery be explained away by some bizarre cloud of dust? Or is it down to some unknown stellar physics gone wild?

Regardless, none of these studies have been able to shake Wright's early speculation that some alien civilization could be constructing a massive star-encompassing structure. And now, with these dimming observations, could it be that we're seeing a megastructure as it's being built?

For now, we simply do not know... but it's a lot of fun to speculate.