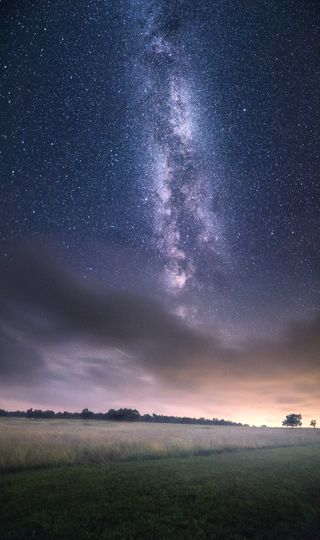 The Milky Way appears to lead a path to the universe from the serene meadow underneath in a sparkling new night-sky photo.

"This meadow is located at the top of a mountain range, and there were clouds rolling up the southwest face of the mountains," Hengen wrote in an email to Space.com. "As soon as they would settle over the meadow, they would start to dissipate, so I had a good amount of time with varying amounts of light cloud cover with plenty of Milky Way above. It really was a pleasant night for this as I was able to take my time."

Earth's host galaxy, the Milky Way ,  is a barred spiral galaxy seen as a band of light in the night sky. It stretches between 100,000 and 120,000 light-years in diameter. It is estimated that the galaxy has approximately 400 billion stars. At the center of the galaxy lies a gigantic black hole billions of times the size of the sun.

"As an added bonus, the cloud cover blocked some of the light pollution from the towns at the bottom of the mountains, which helped light the clouds and also brightened the foreground a bit, while leaving the sky above dark enough to get a good shot in," Hengen added.

Hengen used aCanon 6D with a Tokina 16-28mm lens. This particular shot is a panorama consisting of two vertically stacked horizontal shots, each with a 30 second exposure at f/2.8, 16mm, and ISO 3200.