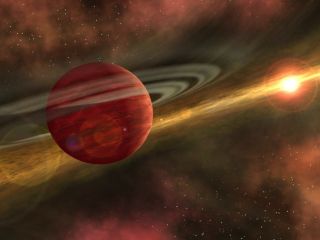 An illustration of an exoplanet that orbits orbits Coku Tau 4, a star located 420 light-years away.
(Image: © NASA)

A powerful greenhouse effect can destroy a planet's chances of hosting life, a new study suggests.

Until proven otherwise, scientists on Earth assume water is necessary for life to arise on other planets. In the search for life outside the solar system, scientists focus on a "habitable zone" around other stars. Inside such a habitable zone, Earth-like planets are neither too hot nor too cold for liquid water to exist on the surface.

A planet that orbits too close to its sun may become parched because of the solar heat. But now, scientists think an extreme greenhouse effect can also push a planet into dry conditions — similar to what happened on Venus. [A Field Guide to Alien Planets]

The new research shows that warming due to carbon dioxide is as powerful as solar heat due to orbit when it comes to drying out a planet. The modeling study was published today (Feb. 9) in the journal Nature Communications.

"This is interesting because it tells you that you need to know more than just the position of a planet to know whether it might be habitable or not," said Max Popp, lead author of the study and a postdoctoral researcher at the Max Planck Institute for Meteorology in Hamburg, Germany.

In the case of hot, hellish Venus, water that evaporated from the planet's surface built up high in the planet's atmosphere and eventually escaped into space. This is called a "moist greenhouse." Today, the atmosphere of Venus is almost entirely carbon dioxide. (Earth is able to keep its water because this planet's upper atmosphere is quite dry.)

To better understand the conditions that trigger such extreme greenhouse effects, Popp and his colleagues created a 3D model of an Earth-like planet that was entirely covered by water. This simulated water-world meant the scientists could ignore the complicated effects of continents and seasons.

The researchers discovered that once carbon dioxide levels in the model reached 1,520 parts per million, the planet's climate was unstable. The surface temperatures rapidly jumped to about 135 degrees Fahrenheit (57 degrees Celsius), creating a warm, moist greenhouse regime, the study reported. (The measurement means there are 1,520 molecules of carbon dioxide for every 1 million air molecules.)

"A planet like Earth will eventually change to a very warm climate, and it will occur relatively abruptly," Popp told Live Science.

The researchers think changes in large-scale cloud patterns drive the warm, moist greenhouse effect, Popp said. The location and thickness of cloud cover can change how much solar heat is trapped on a planet.

Although the findings suggest that greenhouse gases can be as lethal for a planet as orbiting too close to a sun, this process would occur at carbon dioxide levels significantly higher than those experienced on Earth today, the researchers said.

Popp said it's likely impossible for human activity to induce a similar moist greenhouse effect on Earth. To do so, human activity would have to raise the concentration of CO2 in the atmosphere considerably, even more than if all the available fossil fuel reserves were burned, the researchers said.

"This is an idealized study designed to give a comparison between solar [heating] and carbon dioxide," Popp said. As such, Popp said a similar scenario wouldn't happen on Earth anytime soon.